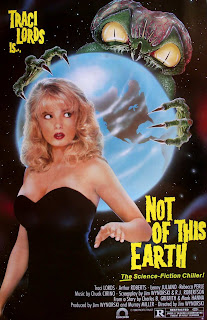 Directed by:
Jim Wynorski
A very fun low-budget comic horror/sci-fi effort that is better than most of its type. Simply put, it's just good, fast-paced B-movie entertainment done the right way by director Jim Wynorski for those who enjoy these types of brainless films. A remake of the semi-famous 1957 cult film directed by Roger Corman (also executive producer of the '88 version), this one stands out on its own merits. The opening credits are even great as we get gory clips from many vintage Corman classics like BATTLE BEYOND THE STARS (1980) and GALAXY OF TERROR (1981). Controversial former underage porn star Traci Lords is sexy, energetic and funny here in her first non-adult leading role; proving she has no problems carrying the weight of a mainstream film by herself. She's plucky nurse Nadine Story, who's hired by the very strange, always-in-shades Mr. Johnson (the amusingly one-note Arthur Roberts) to give him daily blood transfusions. Mr. J turns out to be an alien on Earth to harvest blood, which he sends back home through a special portal in the cellar. In addition, Lenny Juliano fairs well as Jeremy, an ex-con chauffeur also working in the home. His amusing flirty exchanges with Lords throughout actually add a lot of charm and humor to this film. Rounding out the cast are Rebecca Perle as an alien babe in a bikini, an unrecognizable Monique Gabrielle as a mental patient at a bus stop who talks to her tennis racket, Kelli Maroney as a nurse, Becky LeBeau as a happy birthday strip-o-gram and Roxanne Kernohan as an obnoxious hooker.
The violence is only mild (fitting for a lighthearted movie like this), but it's all pretty colorful, entertaining and upbeat. Lords only has two brief nude scenes (this was the last time she has appeared unclothed in a film), but the ones provided by many of the other actresses are gratuitous enough to satisfy our T&A needs. An entire long murder sequence (inspired by Bava) was pinched from director Joe Dante's HOLLYWOOD BOULEVARD and another lengthy clip is borrowed from HUMANOIDS FROM THE DEEP. So if you're a B-movie lover, you're going to find a lot to love here. The same exact story would be filmed several more times in the 1990s; NOT OF THIS EARTH (1995) and STAR PORTAL (1996; with a female cast as the alien) being just two of them.
★★1/2
Posted by The Bloody Pit of Horror at 8:52 AM