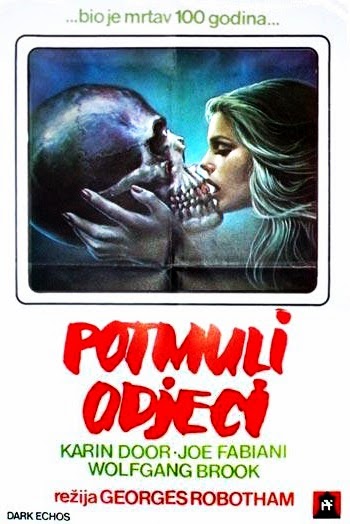 ...aka: Curse of Captain Ghor, The


What we have here is an extremely hard-to-find Austrian / Hungarian / Yugoslavian 'underwater ghost / zombie' flick that, to my knowledge, was never released legitimately on DVD or VHS anywhere other than Argentina (who had a video released many years back through TVE), Poland (thanks for the info Humanoid!) and either Brazil or Portugal (judging by the Portuguese subtitles on the print I watched). I also can't find any verification online about whether it ever played theatrically or not. It's one of those movies that doesn't seem to have a poster or a video cover anywhere online. In fact, there isn't even very much information about this title over on IMDb either. Dark Echoes is very slow-going and is probably of minimal interest to most because of that, but still has some merit and parts of it are quite interesting. And since there actually weren't that many zombie movies released during the 1970s (LET SLEEPING CORPSES LIE, DAWN OF THE DEAD and ZOMBI 2 being the three major ones), it's probably worth a look for die-hard zombie movie completists.


Watching a combination of American, British and European (French, Hungarian, German...) actors filling out the cast, all of whom speak English with varying degrees of success, makes it a bit hard to get a feel for the location. The plot (which reminded me of the later The Fog) involves a series of mysterious murders plaguing a small, lakeside village in Austria. The local police (headed by Wolfgang Brook) are aided in their investigation by American psychic Bill Cross (Joel Fabiani), local writer Lisa Brueckner (Karin Dor) and others. The killer turns out to be a skull-faced zombie / ghost sea captain who resides in wreckage at the bottom of the lake during the day but sneaks up to the village at night to kill off the descendants of those responsible for his death years earlier. There's also some old backwoods witch with a raven on her shoulder who secretly leads a cult of young villagers. These scenes didn't seem to have a lot to do with the main plot but they're colorful and do provide some gratuitous nudity.


First, the negatives...
- It takes about an hour to actually get a good look at the killer, and the first introduction of it (which should have been jarring) is a bit fumbled.
- It's extremely talky and some of the dialogue is terrible.
- The 'idiot plot' syndrome rears its ugly head quite a few times, especially when Dor's character - one of the killer's targets - is left alone out in the middle of a field while a mob goes off into the woods chasing after the killer.
- It's lacking in blood / gore aside from one underwater stabbing and a gory decapitation.


Now on to the better stuff...
- The acting is decent.
- It's well photographed, including some decent underwater photography.
- The village setting is atmospheric, and good use is made out of crumbling old buildings.
- The music score is excellent.
- The zombie design (from John Chambers and Tom Burman) is actually really good.
- Despite the fact the zombie is kept off screen until near the end, the POV camerawork of a growling, heavy-breathing killer is well done and creepy.
- Several of the deaths, while lacking blood, are still effective, including a woman pushed out of a window and landing on a rocky embankment below.


And finally a little bit of trivia...
The director was born in Germany, relocated to the US where he played on UCLA's football team and then went on to work in Hollywood as a stunt double for the likes of Rock Hudson, Clark Gable and John Wayne. Dark Echoes marks his first and only film as director. He was married to lead actress Dor from 1988 until his death last year from Alzheimer's complications last year.

Wow! This was a very informative review!

Where did you find this? I've been looking for it.

I watch this vhs un argentina!i search for a review and this is good!saludos. Vc

I had a very bad quality DVR copy to view but it was in English language. I think there is a better quality one available now. May have to revisit this.