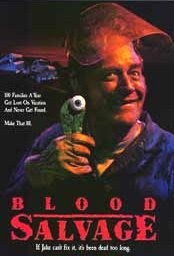 
Jake Pruitt (Danny Nelson) is a psycho, bible quoting tow-truck driver with a slight lisp who causes auto accidents, kidnaps people and sells their organs to black market dealer Mr. Stone (Ray Walston). Tubes, machines and moaning, half-dead people fill up his filthy barn, actually a secret lab (!) where victims are kept on life support until all of their organs can be removed. He also has two sons; the portly, innocent, retarded and sweet-natured Roy (Ralph Pruitt Vaughn) and the sadistic, mean Hiram (Christian Hesler), and a flesh eating pet crocodile that he feeds unfresh body parts to. Lori Birdsong co-stars as April Evans, a bitter, pretty, paralyzed teen girl in a wheelchair who Jake sees competing in a beauty pageant and decides to kidnap, keep hostage in his home and "help" by giving her injections of spinal fluid directly into her back. But the rest of April's family isn't so lucky. After Jake sabotages their RV and tows them back to his home/junkyard, dad Cliff (John Saxon), mom Pat (Laura Whyte) and kid brother Bobby (Andy Greenway), are all chloroformed, taken to the lab and promptly have their organs portioned out. With no one left to turn to for help, can handicapped, pampered April manage to survive life in the sticks with a nutjob on a psycho Robin Hood kick bent on stealing from the healthy to give to the sick?
.
This independently-produced feature from Georgia is much better than expected, with decent performances (with an especially memorable one from Nelson), plenty of gore and black humor and an exciting car chase finale. Yes, it borrows a lot from movies like MOTEL HELL and several Tobe Hooper features, but it's entertaining and well-done nonetheless. Boxer Evander Holyfield (also an executive producer!) has a cameo and Elvis Presley even makes a special guest appearance.

enjoyed BLOOD SALVAGE so much that for the first half i was just as worried about its supply of clever little details running out as i was re the fate of its heroine. a minor gem.

Yeah, I enjoyed this one a lot. Actually, I liked it more than the more famous Motel Hell, which it somewhat resembles at times. I can't believe it's not even on DVD.

oh, yeah, easily. and i'd snap up a DVD in a heartbeat.

producer ken sanders wrote an interesting piece (FANGORIA #95) about submititing the film to the MPAA. they wouldn't give the film an R for two scenes -- the man-on-fire stunt (!), and the yellow fluid ("gatorade") leaking from the medical tubes yanked out of john saxon in the barn. sanders had to spend another $1000 to make VHS copies of his workprint during the appeals process. he wouldn't cut the film; they eventually relented.

Wish I could say I was surprised by any of that nonsense but I'm not. I think it went without saying that in the 80s and 90s that the MPAA were going to come down as hard as possible on pretty much EVERY horror film submitted to them. They probably thought they could bully directors and producers into making fewer horror films with their tactics but we see how well that worked out for them. lol. Glad to hear the producer stood his ground and got the film passed uncut. There's not a single moment in this movie that's even remotely close to earning this anything other than an R rating!

sanders jokes that he initially worried about bribing them to move up from a kiss-of-death PG! first day, he mistakenly entered a screening-room and the execs were listless, barely looking at what was running. he suspected the higher-ups' objections to BLOOD SALVAGE came instead from the _projectionist_, who disapproved of the genre and was troubled by the same sequences!