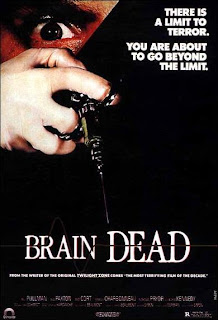 Directed by:
Adam Simon
Dr. Rex Martin (Bill Pullman) is a brilliant neurologist who’s obviously losing his mind. After being roped into doing bizarre experiments for a top-secret government lab and a strange encounter with a rather distraught colleague (Bud Cort), things start getting even weirder, people are murdered (or are they?), he's committed to an institution and his world turns into one big freakish fusion of reality and nightmare. Director Adam Simon (in his directorial debut) reworks an old, un-filmed Charles Beaumont script (both received credit) in a movie that often bites off more than it can chew and many will find incomprehensible, but still manages to maintain interest through unpredictable plotting, good performances (Bill Paxton scores as Dr. Martin's shady colleage and there are nice turns from Nicholas Pryor, George Kennedy and others) decent special effects and a few well done shock scenes. I thought the ending was a bit unsatisfying, but I definitely give this film full credit for at least trying to do something different.
.
Simon followed this up with the lame killer-dinosaur film CARNOSAUR (1993), which was one of the highest grossing films for Corman's New Horizons company, and the excellent documentary THE AMERICAN SCREAM (2000).
★★1/2
Posted by The Bloody Pit of Horror at 10:04 PM

agree with you on the ending. most fun for me was imagining, as the film unspooled, what corman might have done with it in the early-mid '60s. interesting that beaumont was writing the original script -- PARANOIA -- as his own neurological issues were surfacing.

second-billed bill paxton was in the band martini ranch; they contributed two tracks exclusive to this movie. one's an instrumental over the end credits. the other, "mystic revelation", i didn't catch.

This is another I need to re-watch!