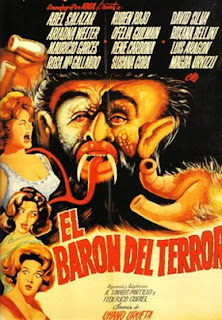 Directed by:
Abel Salazar
A sorcerer is burned at the stake way back in 1661, vowing revenge on the descendants of the executioners. "300 years later" he returns to Earth via a comet and goes on a killing spree, mutating into a beast from time to time with a long forked tongue that he uses to suck the brains out of his living victims. He also keeps a bowl full of human brains locked up in a chest for easy access. Some of the more colorful victims include a hooker and a horny chick who tries to pick up The Brainiac at a bar. I mean, what true-blooded woman could resist a monster with a foot long tongue? This silly b/w import (with awful dubbing) is one of the more famous Mexican productions from this era (at least here in America), but it's not one of the best.
★★
Posted by The Bloody Pit of Horror at 10:07 PM