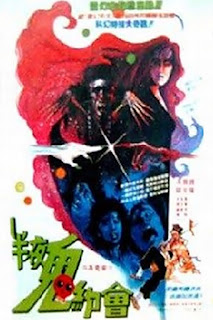 
At a small film studio, a director (Teddy Yip) and crew are shooting some kind of period action / horror / samurai swordsman epic. When they're not busy gambling away their pay, some of the immature extras play a prank on obnoxious fellow extra and "fatso" Billy Tung (Billy Lau, doing his usual mugging routine) by pretending to be hopping vampires, leading him to humiliate himself by confessing that he's never had a woman (“I'll shoot you with my virgin pee!”) Unbeknownst to any of them, but a real ghost (Lau Chin-Dai), a nice, friendly one at that, is actually haunting the grounds. Studio janitor Uncle Fok (Fat Chung) knows about her and interacts with her. Earlier, he'd found her bones in the mountains behind the studio and had them buried. However, even a proper burial hasn't brought her peace and she's still hanging around. The ghost girl idolizes the studio's star actress Jenny (Petrina Fung), but encounters with the starstruck ghost, brief and innocent as they may be, drain Jenny of her energy so Uncle Fok frowns upon it. 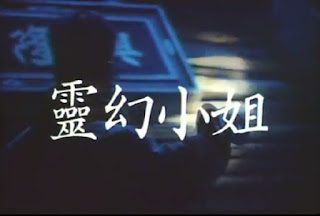 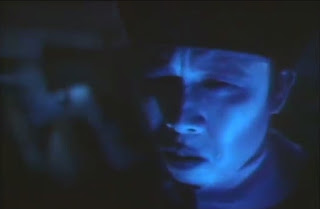 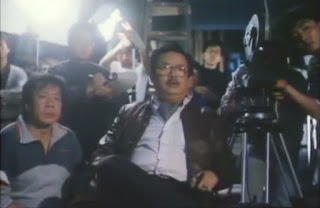 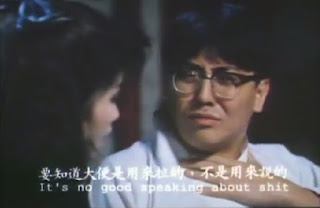 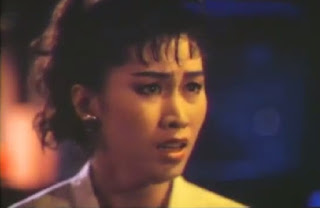 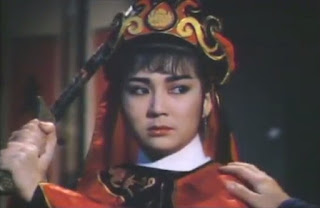 A frequent presence on set is Wong-Ngan (Pauline Wong Yuk-Wan), who's married to studly film star / martial arts expert Wai-Keung Chiu (Norman Chu); a man who has a bad habit of (really) beating the shit out of the extras during action scenes. Wong-Ngan is just a wee bit insecure in their marriage, paranoid he's fooling around behind her back and had previously tried to kill herself by drinking antiseptics and slitting her wrists multiple times. Wai-Keung, who's doing an all-night shoot, promises to be home at 8am so they can have breakfast. However, there is no overnight shoot. He just wants to go out with his buddies to get some drinks. Wong-Ngan catches him there, slaps Jenny in the face, is slapped back by Wai-Keung and angrily storms off. When a drunk Wai-Keung returns home later that night he discovers his wife has hung herself. The fact she put on a red dress beforehand means that she'll be back. 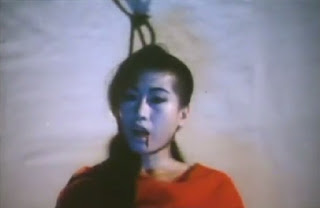 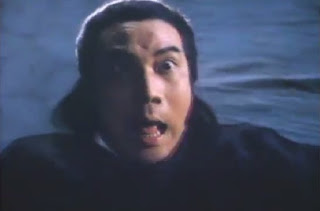 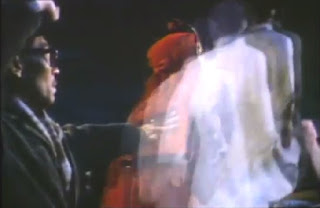 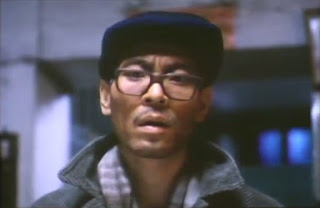 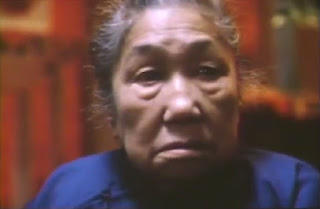 After the funeral, Wai-Keung doesn't seem the least bit upset (“Wives are like clothes... I can buy new clothes.”), but he soon will be once his former wife's vengeful spirit returns to settle the score. She doesn't waste any time taking over Jenny's body and sends her out to try to kill him. The friendly studio ghost opposes her and Uncle Fok, who's not just skilled as a janitor but also at exorcism and swordfighting, expels the ghost from her body. Jenny is taken to the hospital, while Uncle takes Wai-Keung to an old lady spirit medium (Chan Lap-Ban) who does some kind of ceremony with incense, spell paper and eggs with faces drawn on them that allows the angry ghost to speak to her husband through her. Convinced he and Jenny were having an affair, the unreasonable ghost proves herself to be immune to reason and promises to kill them both. 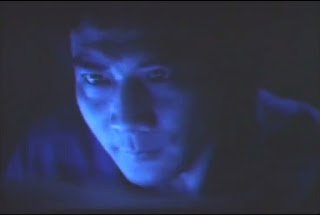 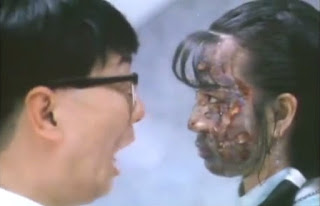 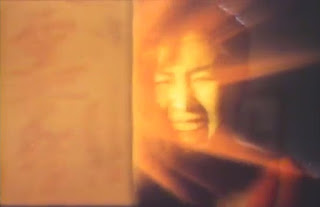 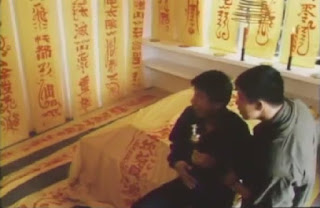 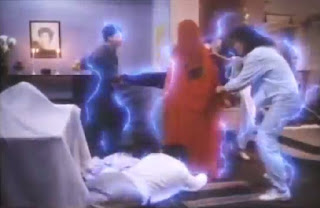 Wai-Keung attempts to appease the spirit by putting some of her favorite things around their home but when that doesn't work he goes to “ghost buster” Priest Troublesome (Peter Chan Lung) for help. They rig up his apartment to trap the spirit inside (using “magic powder,” a spell paper lamp and contaminated perfume) and then Wai-Keung's left alone to stab her with a magic dagger. None of that works and she ends up attacking him in the parking garage (by starting up and moving the cars herself) and then blowing up his car with him inside. But now that he's gone to join his wife in ghost world, she still won't be content until the innocent Jenny is dead, too.  Uncle Fok comes up with a plan to get her soul out of her body and trap it in paper so that Wong-Ngan thinks she's dead. He can then return to the spirit to her body once the ghost is gone.


After successfully separating Jenny's spirit from her body, Fok prepares Billy and four of his pals to do battle with the ghost but their trick backfires. Wong-Ngan gets into a heated battle with both Fok and the good girl ghost from the movie studio, which ends with one of the guys (Tai Bo) being forced to eat Jenny's spirit paper containing her soul (otherwise it'll be burned and she'll be dead for good), which makes him pregnant. Wong-Ngan leaves but she'll be back so Fok sends for reinforcements. Ghost expert Master Wong (Bill Tung Biu), who's “sometimes” crippled and in a wheelchair but only when he wants to be (?), and his little apprentice Wai (Ho Kin-Wai, from the Mr. Vampire sequels) show up to help during the final battle. 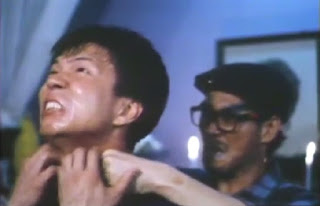 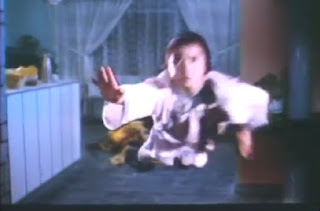 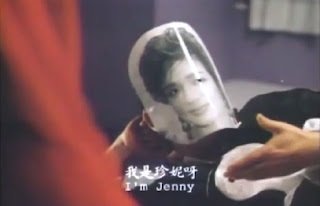 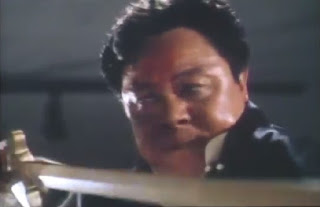 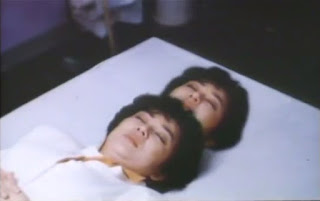 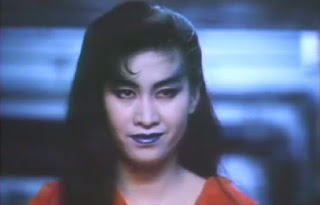 This movie is the poster child of a 5 out of 10, or a C grade, or a 2 out of 4 as my ratings go. Nothing about it is terrible but there's also not much about it that really stands out either. While it does an admirable job balancing the comedy and action, the plot and all of the ghost fighting techniques are overly familiar, right down to a strange infatuation with virgin urine. We are even shown the little boy pissing into a bowl so it can be poured down some poor guy's throat to drive out the evil spirit at one point. (The boy is the only virgin left in the room after Billy gets raped in a coffin by a horny old female ghost in a cemetery). Also setting things at a film studio and not using that platform to take a few humorous digs at these kinds of films seems like a wasted opportunity. The best this really has to offer are some surprisingly well-executed special effects of spirits splitting and hopping in and out of bodies. 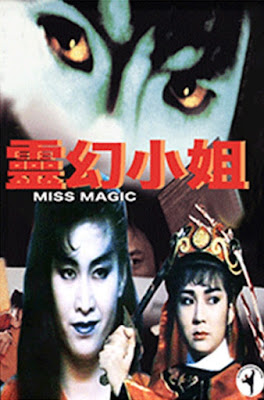 The director, who passed away earlier this year, is best known as an actor (he directed just four films but acted in over 150) and is the son of screen veteran Fung Fung, who also acted, directed and worked as a stuntman and action choreographer during his long career. The leading lady is Fung's daughter / the director's sister, who was a popular child star in the 1960s and likened to Hong Kong's answer to Shirley Temple. Despite receiving top billing, she doesn't really get much to do here and is covered with a sheet during the entire finale.


Currently with just six votes on IMDb, this isn't the easiest of such films to find nor is it really worth the effort. There's no DVD release anywhere to my knowledge but there was a subtitled VHS from Ocean Shores back in 1988 and likely a VCD release also.