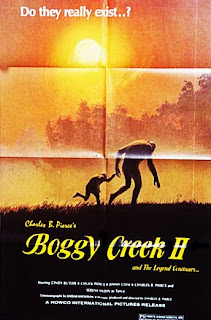 ...aka: Barbaric Beast of Boggy Creek, Part II, The
...aka: Boggy Creek II: The Legend Continues
Directed by:
Charles B. Pierce
After THE LEGEND OF BOGGY CREEK (1972) and RETURN TO BOGGY CREEK (1977) comes BOGGY CREEK PART 2 (?!), which is apparently the "official" sequel since "Return" was just a rip-off trying to cash in on the name. Director/writer/producer Charles B. Pierce narrates as University of Arkansas anthropology professor Brian Lockhart, who travels to the backwoods swamps of Texarkana with three young students; Leslie (Cindy Butler), Tanya (Serene Hedin) and Tim (real-life son Chuck Pierce) to hunt down the eight-foot-tall, 350+ pound Yeti-like Boggy Creek creature. They talk (a lot), camp out near sightings, set up tracking equipment, find mutilated animals, are attacked by a rabid dog and finally come face to face with the creature (and its injured baby). Flashbacks (including a large guy taking a crap in an outhouse while looking at bra pictures in a Sears catalogue) reveal eyewitness accounts of encounters with the beast. Eventually they end up on a boat ride and trapped in the sticks with crazed "Old Man Crenshaw" (Jimmy Clem), a fat, dirty redneck in shirtless overalls, who chews on tobacco and is holding the baby monster prisoner.
.
Cut-rate in every respect, but you've gotta love those authentic Southern accents in lines like "I smayl ya!" and "What are ya'll doin' he-ah!?" It all ends with a nature-friendly speech. The film actually played in theaters as THE BARBARIC BEAST OF BOGGY CREEK, PART II in 1985 and was deemed bad enough for its own episode of Mystery Science Theater 3000 in 1999.
★1/2
Posted by The Bloody Pit of Horror at 10:09 PM