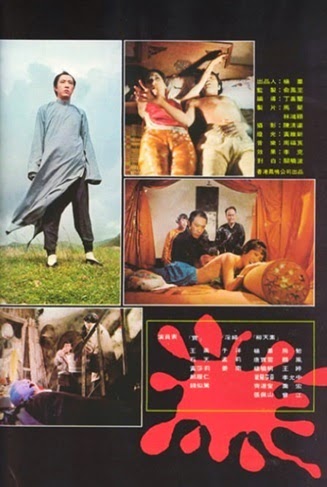 
Uneven three-part horror anthology, with liberal doses of heavy-handed moralizing, is presented by Peter K. Yang and opens with a scroll that reads (at least according to the English subs) "Charm can do no good on ghost. You better believe it. This film is based on Cantonese legend and asks that people do good deeds." The first story, "The Treasure," opens on a dark and stormy night as pregnant young Ah Heung (Shirley Huang) is going through a traumatic labor. The woman's husband, Ah Tak (Shih Tien), notices that the eyes on an old ladies corpse (which is kept downstairs) won't stay closed and the image on a photo of her keeps changing. We then go into flashback mode to reveal that the dead lady - Gan Niang (Chi Shih Yong) - had tried to run off with a basket (presumably containing a treasure) that Ah Nak had unearthed. In a fit of rage, he killed her with a hoe. Somehow this results in a murderous demon baby that bites off a finger and chews out a throat. Pretty silly, and it runs only about ten minutes.

Next up in "The Wanton," an adulterous woman (Meng Li) and her lover (Yu Yang) hit the husband over the head with a hammer, trap him inside a trunk and sink it in the ocean. When they return home they find themselves cursed with water and visions of the murdered husband. In one scene, the guy can't stop urinating and nearly floods the street. Their bathtub becomes a bottomless portal to the sea. A mystic (who strangely looks identical to the dead husband) advises them to retrieve the trunk and replace the metal nails with wooden ones to trap the spirit inside. After doing so, they both have a nightmare about their bed bleeding and spinning around, before he becomes possessed by a dog (?!), pants, sniffs her, licks her and finally starts biting her. Again, this is short (about 20 minutes), goofy, overacted and doesn't really seem to take itself too seriously. Some of the lighting choices are colorful.

The final story, "Lau Tin Sok," runs nearly an hour and is more serious-minded than the first two segments. Yang Chuh (who also goes by the names Kwan Yeung and Peter Yang Kwan) stars as the title character, a nice, charitable doctor who specializes in acupuncture treatments. Royal court messenger/executioner Chiu Hung (Chi Lien Kuei) shows up asking for the doctor to help out a wealthy Madam (Wang Ting), who is suddenly suffering from fainting spells and seems to be delusional. Another man (Chang Pei Shan) doesn't want the madam to become lucid again because she'll spill the beans about them being lovers, so he steals the doctor's pins, kills the Madam with them and lets the good doctor take the blame. Dr. Lau is thrown in prison and learns from the executioner (who has befriended him because he helped cure his young son) learns of "Blood Reincarnation," a technique used by monk's to return from the dead for seven days. The doctor goes through with the ceremony (which involves facing a certain direction, saying where you're from and rubbing blood on your chest) before he's beheaded.

Immediately after, Dr. Lau returns home to his wife Siu Wun (Tang Pao Yuh), mother (Au-Yang Sha Fei) and son. His strange behavior (refusing hot food, refusing to bathe, casting no shadow and feeling ice cold to the touch) forces him to reveal to his wife what he truly is (a ghost), and he tells her he returned home to visit with them one last time, say goodbye to his patients and complete a book to give to his infant son. Meanwhile, the real killer hires an exorcist to try to capture Lau's spirit and conceal his earlier crime. This final tale gets a bit too mushy and melodramatic during the drawn-out conclusion, but it's far better than the two stories preceding it. The cast is very good (particularly the lead actor, who's excellent), the story and mythology are both interesting and there's an amusing little twist at the very end.

A bit difficult to find this one here in the U.S., and to be perfectly honest, I wouldn't really go out of my way to secure a copy of it even though there are worse examples of the anthology format out there.

can anyone tell me where i can get a copy of Yingyang jie (Blood Reincarnation), as i have been searching dvd stores the world over for this movie.

Trash Palace also has it, but it costs 12.00 dollars there (but the shipping charges are free if you live in the U.S. or Canada).

In both cases it's on DVD-R, so I can't vouch for the quality of the print either place is selling.