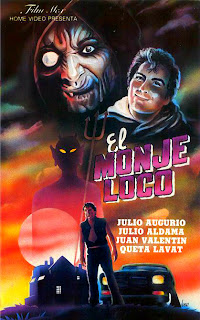 Organist, singer and church music director Martín Liceaga (Júlio "Augurio" / Aldama, son of the director) and one of his "flock;" the lovely Carmen (Luz María Rico), start collaborating on music together. The two badly lipsync to an operatic version of Ave Maria (for four minutes!) and then Martín finds himself so caught up in the moment that he must resist the urge to get more, uh, physical with the young beauty. He instead goes to pray for strength, but can only see visions of Carmen's face over top those of the Virgin Mary and Jesus. The guy just can't get her out of his head, so he confesses his feelings of lust to the elderly Padre Superior (Paco Pharrez), who gives him a pep talk and an ornate crucifix... and reminds him his faith is most important of all. Carmen ends up meeting a potential suitor, which enrages Martín. He has a dream of her passionately begging him to kiss her, but she turns into a skull-faced topless demoness instead. One day during confessional, Carmen discusses some sordid details about her new relationship, which is enough to send Brother Martín over the edge. He chases her, starts trying to rape her and accidentally knocks her off the roof. He sneaks her body off to a cemetery, but is haunted by visions of Carmen and the gets his comeuppance from God himself. A one-eyed monk laughs maniacally. The end. Well... the end of this segment. 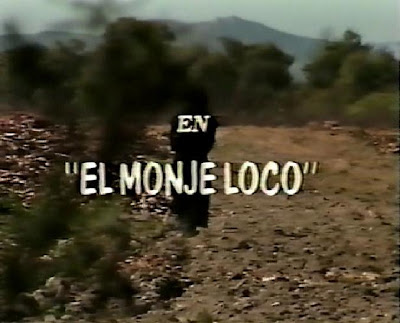 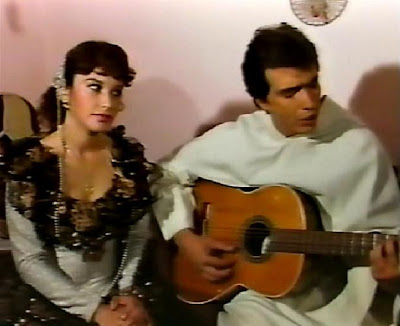 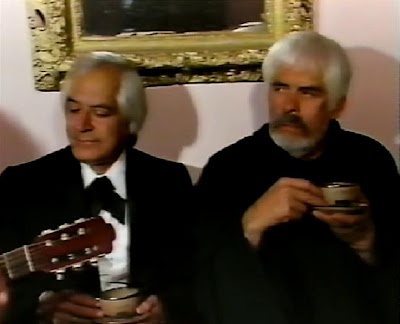 The film then jumps ahead to a second story: "El talismán maldito" (the first story is never named). Hard-working, depressed farmer José Martinez (director Aldama) and his wife Susana (Queta Lavat) are having financial problems and might lose their ranch. To make matters worse, their son Alejandro (Jorge Aldama) is injured working on his truck and the jack falls out from underneath of it. Jose tries to hawk his prized crucifix (the same one seen in the first story) but the pawn broker isn't interested in it. Desperate, José makes a deal with a shady guy, who gives him a three-pronged wooden fork which is supposed to grant his wishes (with each wish granted a prong disappears until they're all gone). Feeling he's exhausted his options, José raises the fork up to the sky and prays to try to get his family out of debt. It ends up working... but not without an unexpected cost to the family: his son's life. But he still has two more wishes to grant... 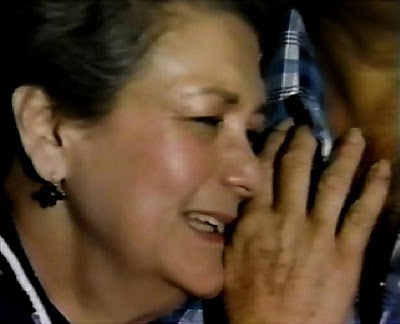 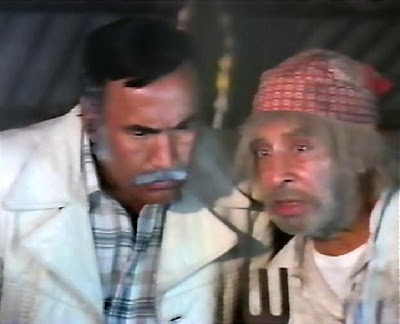 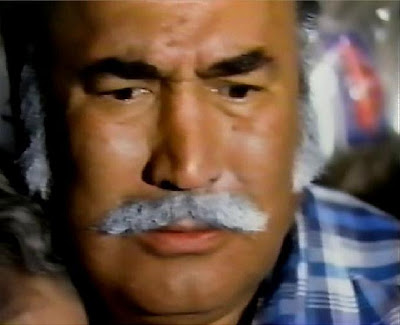 El monje loco ("The Crazy Monk" or "The Mad Monk") begins and ends with a cloaked Grim Reaper-ish figure walking through an empty field. Who it is isn't made clear at first since he's not seen at all during the first story. However, the character (who has something that looks like a ping pong ball over one of his eyes) pops up a lot in the second segment to provide running commentary and cackle maniacally as the events unfold. Obviously these scenes were added to bulk up the run time. The first story runs 40 minutes, while the second runs 30 and would probably only run 20 without the monk scenes (the rushed finale is also indicative of some production problems). As is, the whole package runs 77 minutes. 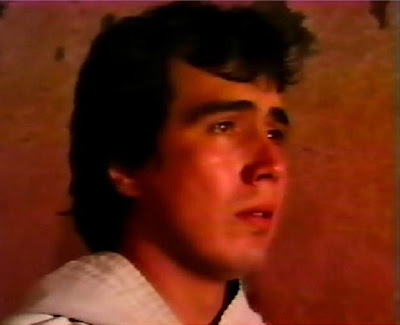 A remake of 1940's EL MONJE LOCO, this was shot-on-video and has production values comparable to public access TV 'productions.' The videography is a little shaky at times, with the camera jerking from left to right for no reason, images sometimes blurred and lots of cheap overlapping effects. The sound is also occasionally a little muffled, with dialogue difficult to hear at times. 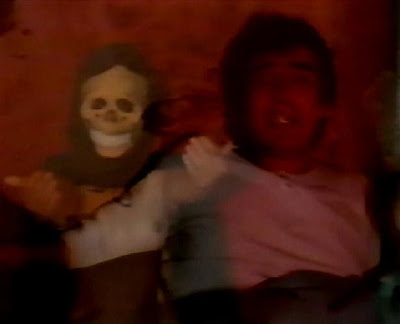 Heavy on talk and religious moralizing, low on production values, originality and artistry, this is not going to appeal to many people out there. You might have more fun counting the amount of times flies swarm in front of the camera and land on the actors than actually watching the movie. Still, if you can ignore the cheap, stagy feel, the amateurism and don't mind simple, straight-forward storytelling, you could probably sit through this. At the very least, it's sincere and the actors aren't bad. 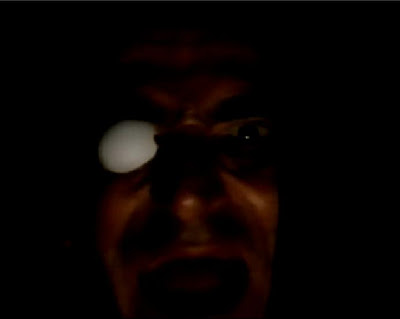 It was written by Rafael Portillo (possibly best known for directing the AZTEC MUMMY films) and Roberto G. Rivera (who - like director Aldama - is best known as an actor). It was released on VHS only in Spanish-speaking countries. 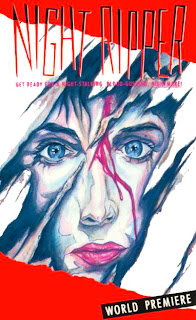 I can see where they were trying to go with this one, but they didn't quite have the budget (or talent) to pull it all off in the end. The film really lacks guts. And when I say it lacks guts, I mean it literally lacks guts. I'm only mentioning this because the plot involves a hooded nut going around murdering young ladies and then disemboweling their corpses, so this would have really benefited from showing a butchered corpse or gory murder every now and again. Instead, all of the nastier stuff is kept off-screen. In place of what should have been there are a few awkwardly-staged and horribly edited stabbings and throat slashings that are repetitive and dull. Subtlety doesn't bode too well for a shot-on-video slasher with amateur acting, silly dialogue, blink-and-you'll-miss-it partial nudity and a completely routine plot. This thing simply needed to be sleazier to overcome all of its other limitations, especially considering that the market is already flooded with hundreds of similar films with better production values than this one. Why not just watch one of those instead? 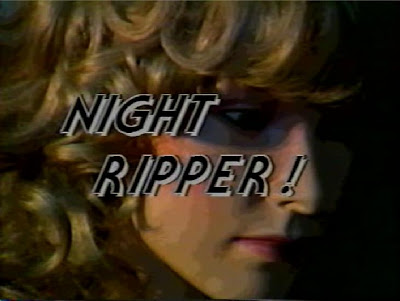 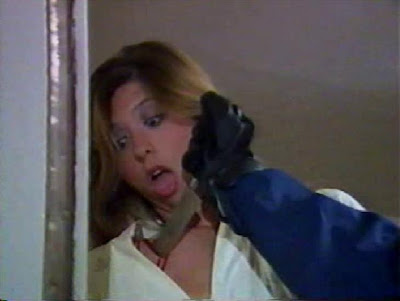 Darlene returns from "modeling class" only to encounter a bespeckled perv named Mitch (Larry Thomas) lurking around outside her apartment. The two briefly discuss "The Ripper," a local nutbag given the name by the press for similarities to the Jack the Ripper slashings (including showcasing knowledge of human anatomy and surgical precision in dismembering the bodies), then she heads inside to get ready for bed. Later on that evening the doorbell rings and, knowing full well that a serial killer who's been butchering random women is out there and that a weirdo is basically stalking her, Darlene decides to casually open the door without bothering to ask who's there. A gloved-hand reaches her a rose and all she manages to get out is a monotone "What the...?" before she's stabbed in the chest. 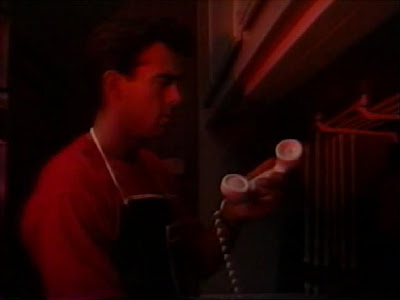 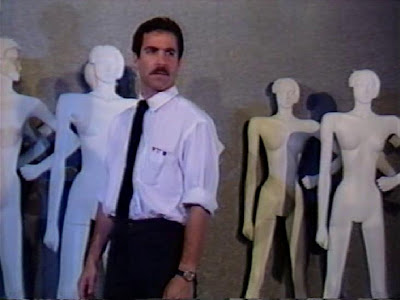 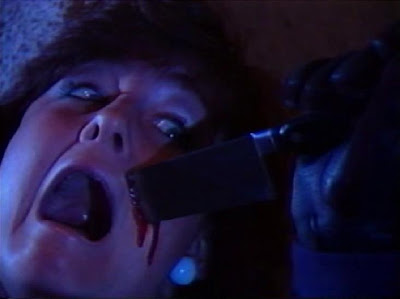 Mitch co-owns "Beauty Photography" with his business partner; photographer David (James Hansen). David is engaged to be married to Karen (Suzanne Tegmann), but becomes infatuated with Euro-accented legal secretary named Jill (Danielle Louis), who shows up at his shop looking to take bathing suit "glamour shots" for her boyfriend. But that's OK. Karen's fucking her boss, anyway. When David catches wind of her affair he starts to pursue Jill and, while the two start getting mushy, the psycho continues butchering women. Another woman is killed after informing her married lover that "This isn't love! This is two sweaty bodies fucking under flood lamps. And I'm sick of flood lamps!" Since many of the victims were models that could be directly linked back to Mitch and David's studio, police lieutenant Bernie (Simon De Soto) and his partner Dan (Lawrence Scott) start snooping around. They become especially interested in "Beauty Photography" after Karen is murdered. 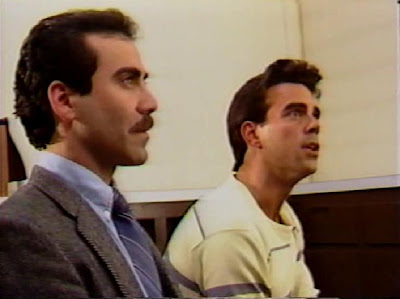 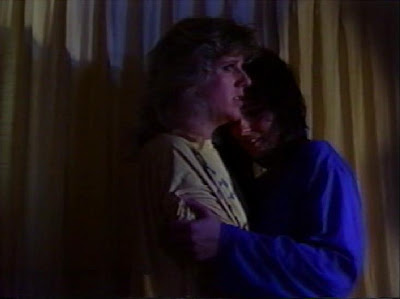 Several suspects immediately emerge from the pack. One is, of course, Mitch. Not only was he already seen at the crime scene harassing a woman just minutes before she was murdered, but he also worked as a (gasp!) butcher for five years before deciding to become a sleazebag photographer. It's also revealed that he had been burned by a model girlfriend, who chose her career over him, years earlier. The second suspect is a flannel-shirt-clad lesbian mail lady named Janet (April Audia as "April Anne"), who tries to come on to Jill but is rejected and has a screaming fit because she wants "Angela" out of her head. While those two may be red herrings, the reveal is poorly telegraphed well in advance by poor acting and clumsy, obvious clues scattered throughout. The conclusion takes place at the "Vogue International" mannequin factory, where the psycho goes on a rant about women being bitches and models being users and bitches and how all models deserve to have their insides ripped out because they don't give a shit about anyone else's insides. 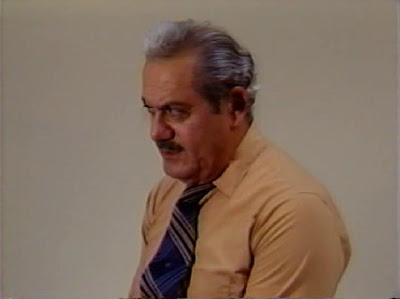 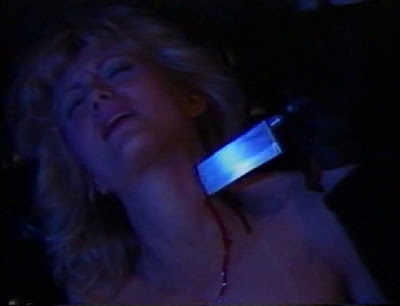 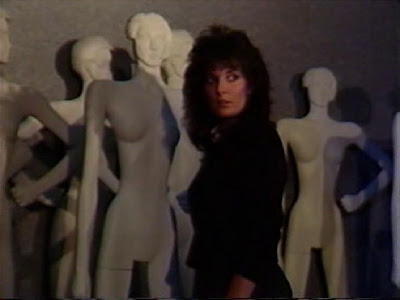 Along the way, there's some slight time padding, including as a minor subplot of the police pursuing a burglar and a three-minute long scene of someone driving through the city that's just an excuse to play an entire song. Despite being neither original (though the plot is no worse than what you'll find in the majority of other slasher and giallo films) nor good, I have to admit that I didn't have a problem sitting through this. I was mildly entertained. Mildly. I was even prepared to give this a slight pass... until the incompetent ending reared its ugly head to knock it down a notch. Oh well. 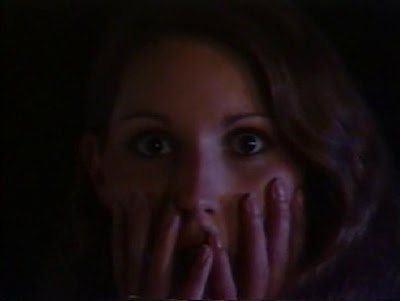 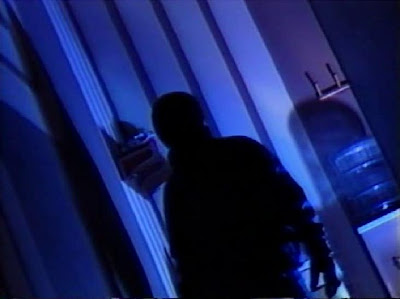 The only recognizable cast member is Courtney Lercara, who has just one scene here as a victim, but went on to appear in the fun low-budget backwoods slasher SLAUGHTERHOUSE (1987) and in Tim Ritter's KILLING SPREE (1987). Director / writer Hathcock also made VICTIMS! (1985), STREETS OF DEATH (1987) and MARK OF THE BEAST (1990; aka Fertilize the Blaspheming Bombshell). VHS by Magnum. No DVD.