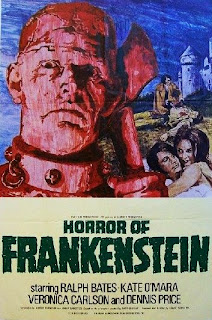 After a decade-and-a-half run of successful costume horrors usually featuring more mature protagonists, Hammer decided to start specifically catering some of their output toward a younger audience with stories centered around more youthful protagonists. So no, Peter Cushing (who headlined all of Hammer's previous Frankenstein films) wasn't invited to this particular party. Instead we get Ralph Bates in the central mad doctor role. Bates had just made an impression playing the dashing, aristocratic black magic practitioner who helped to resurrect the Count in TASTE THE BLOOD OF DRACULA (1969) and, while no spring chicken here at 30 years old, adequately fills the role of an evil, unfeeling medical school student. His Victor is a brilliant, smarmy sociopath with a truly pompous attitude who always seems to be pissing someone off. He kills indiscriminately: If you get in his way, you're toast and that's that. When Victor's rich father, who's carrying on an affair with the underage housemaid, Alys (Kate O'Mara), refuses to spring for him to go to a more prestigious university, Victor simply rigs his hunting rifle to explode and kill him. 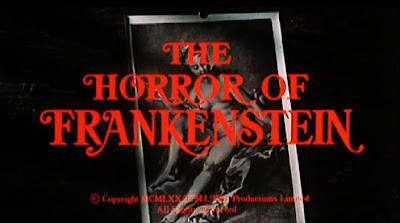 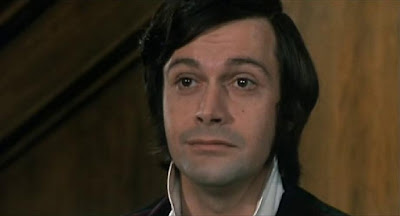 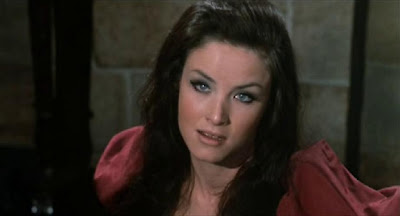 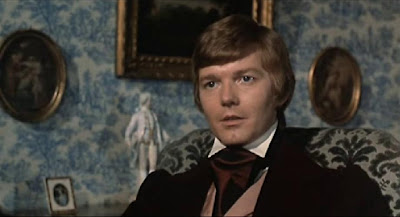 Now with the title of Baron, a huge castle and a considerable amount of money all at his disposal, Victor decides to go to Vienna to further his studies. During his time there, he manages to knock up the dean's daughter, but tells him not to worry: Now that he has medical training, he'll just give her an abortion. The dean refuses and says he'll arrange for the two to be married. Victor decides to flee for the summer instead, with no real intentions of going back, and invites his classmate Wilhelm (Graham James) to come along with him to aid in his experiments. Away from town six years, Victor is promptly reunited with several former classmates. One of them, the sweet Elizabeth Heiss (Veronica Carlson, a real stunner), is still in love with Victor after all these years and has denied many potential suitors awaiting his return. Too bad for her, but he could care less and never has really liked her, anyway. He much prefers his no-strings-attached arrangement with Alys, who's still working as housekeeper in the castle and promptly becomes his lover. 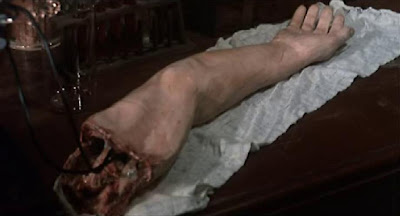 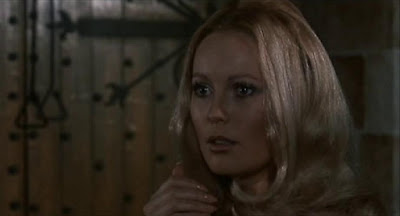 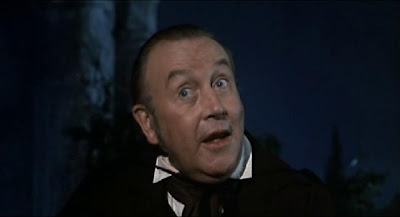 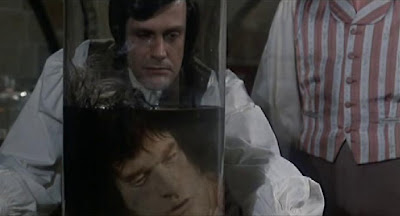 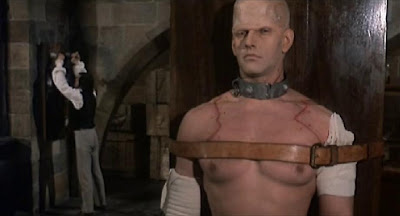 After successfully reviving a dead turtle, Victor arranges for a sleazy grave robber (Dennis Price) and his wife to provide him with fresh body parts so that he can construct a human. The grave robber is able to acquire six whole bodies after an avalanche and when Wilhelm questions the ethics of all this and threatens to report Victor to the authorities, he's promptly electrocuted to provide even more parts. Now needing a brain, Victor poisons Elizabeth's professor father (Bernard Archard). Because of his debt, Elizabeth loses her home and is forced to come stay in Castle Frankenstein, where Victor plans to make her the new maid and decides to rid himself of Alys when she attempts to blackmail him. After stitching it all together, Victor's human creation (muscleman David Prowse) is revived by thunder. It immediately escapes and chops a villager up with an axe. Victor feeds it raw meat, attempts to teach it basic skills like sitting down and obeying his orders and is eventually able to make it kill for him. The obligatory police detective (Jon Finch), another of Victor's childhood friends, is on to him, though. Much use is made of an acid pit - convenient for eliminating evidence - in the meantime. 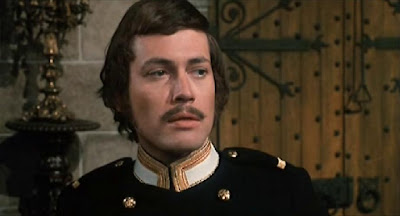 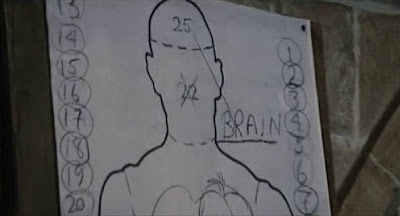 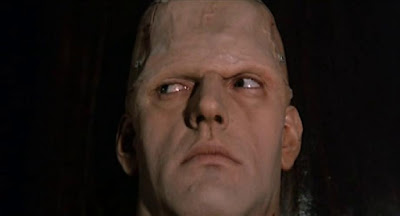 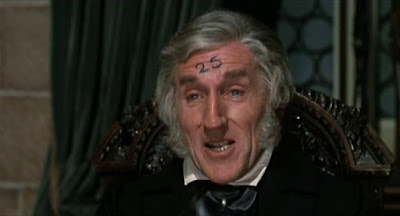 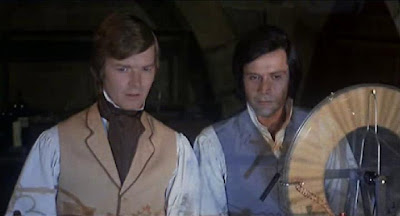 Director Sangster, who's better known as a script writer (and co-wrote this one as well), fails to inject much life into this entry, visually or otherwise. Perhaps strangest of all is his inability to really make good use of the lavish costumes, props and sets which were clearly at the studio's disposal. Some of the more talented of Hammer's production people seemed to be on hiatus when this was made, as the photography and music score - while competent - are also a bit lackluster. As scripted, the young mad scientist in this outing seems a bit one-dimensional, as well. The main problem however lies in the pacing. Because over an hour is spent leading up to the monster's creation, the concluding scenes seem rushed, leading up to a truly pathetic and anti-climactic final scene. 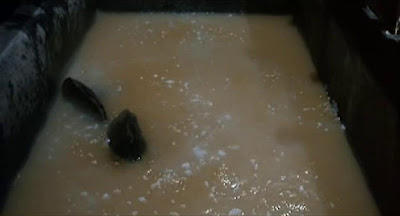 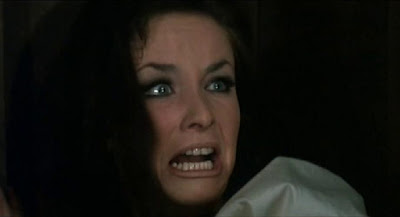 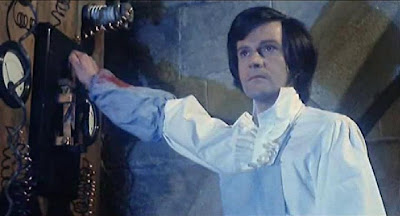 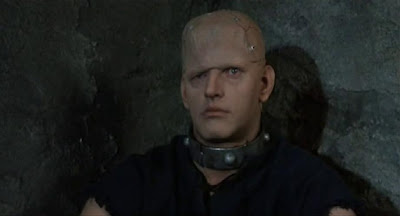 On the plus side, O'Mara manages to bring some real verve to her supporting role (which is very much appreciated, especially considering how bland most of the rest of the cast is) and veteran actor Price seems to be having a ball in his small role and has the film's most amusing scene sitting in a cemetery eating sausage and crackers while making his pregnant wife dig up a grave for him! The film provides some effective black comedy here and there (as well as some rather juvenile moments), and the monster design is pretty good. Mr. Prowse would also play the creature in FRANKENSTEIN AND THE MONSTER FROM HELL (1974); Hammer's last Frankenstein film.

Like many of the studio's other titles, this has been well-serviced over the years, enjoying frequently television airings that continue to this day, as well as wide distribution on VHS and DVD (Warner in the UK; Anchor Bay in the U.S.).

A dispute over ownership of a popular comic strip character fuels the murder spree in this bloody mystery. Martin Graham, who claims to be the author of Sexy Cat, a comic involving a masked murderess beloved by millions (sort of like a gory version of Catwoman), hires low-rent private eye Mike Cash (Germán Cobos) to get information that can help him win back the copyright of the character he claims to have created. Right after their meeting, someone sneaks into Graham's apartment and slashes his throat. Police Lieutenant Cole (Mariano Vidal Molina) is now on the case, but Cash decides to continue investigating on his own. He goes to a TV studio and meets the cast and crew of the upcoming Sexy Cat series, which is set to begin taping the following day. Greedy, sniveling producer Paul Karfas (Marques de Toro) promptly tries to pay him 10 thousand dollars so he'll go away but Cash refuses. Studio actress Marta Florence (Dyanik Zurakowska), who's set to co-star in the show, takes the detective's side and ends up getting killed when someone sneaks a poisonous snake into her apartment. Each of the murders matches one of the original comics ("Sexy Cat in The Venetian Dagger," "Sexy Cat in The Coral Snake" etc.) and the killer dresses in the Sexy Cat outfit (black leather cat suit with boots and gloves, a blonde wig and a mask) to do their dirty work.

The killer next visits Karfas' former secretary Carla, promptly karate chops her unconscious, ties her up and then asphyxiates her with a plastic bag. Whoever's doing the killing always seems one step ahead of poor Mike, and he ends up at the scene of the murders right after they occur. The list of suspects is ridiculously lengthy. Sugar Lane, who's sleeping with Paul and has secured the Sexy Cat role in the series, and Gail Crystal, another of Paul's former lovers ("a mixture of races without scruples") who's bitter about being tossed aside for the other actress and not above trying to pay the detective to implicate Paul in the killings are just two. There's also Mrs. Sheen, Paul's wealthy ex-wife, whose other husband had been mysteriously killed years earlier, leaving her to raise her wheelchair-bound son Malcolm with help from family friend Dr. Joe Kramer. Sexy adulteress Lacy St. James (Lone Fleming) might also fit the bill and the same goes for Velda Lynn, the original model for the Sexy Cat character, who might be angry that she didn't get to play the character in the TV version. Whoever it is looks good in a cat suit. During one sequence, the killer pops out of a closet brandishing razor sharp cat claws and makes a bloody mess out of a victim and the finale takes place in a junkyard where someone gets crushed by a piece of heavy machinery.

As much as I hate knocking something with a title as cool as Sexy Cat, some things just can't be avoided. There's the seed of a good film in here somewhere, but this isn't the way to go about it. The film is far too convoluted and the presence of so many suspects (many of whom get no development whatsoever and just one brief scene) really does the movie in. It probably doesn't help that I watched a heavily damaged print with horrible audio (taken from an ancient Greek VHS release), but that's sadly all that's available at this time. It was English-dubbed, runs just 75 minutes and appears to be cut. Shower scenes and such end abruptly; likely to remove any trace of nudity, though the gore seems to be intact. I guess Americans aren't the only ones who bask in the glory of violence and bloodshed but turn their noses up at bare breasts.

It's pretty colorful (something severely muted in the version I watched), the macabre comic drawings are fun and there's quite a bit of humor (including an extremely lame bit where a queeny dress designer comes to the station to report spotting the killer), but none of that changes the fact that it's poorly written and structured. Perhaps I'll give this one another shot if a better print (hopefully one that's uncut with the original audio) surfaces.

Director Tabernero also made VAMPIRES OF VOGEL (1974), which again starred Cobos and is just as rare as this one. Some sources also claim he made the Eurociné bomb CANNIBAL TERROR (1981) - probably the single worst jungle/cannibal movie - though the film is credited solely to Allan W. Steeve, an alias for Alain Deruelle.