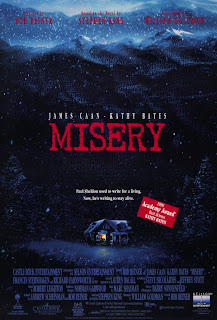 
Novelist Paul Sheldon (James Caan) has made a name for himself with an eight-volume romantic drama series centering around a character named Misery Chastain. The wildly successful books have put him on the map and made him rich and famous, but he's now ready to take his career in a brand new direction. After all, who - especially artists striving for respectability within their industry - wants to be be seen as a one-trick pony? Paul has just penned a new novel. Every year he goes to the wintery Silver Creek Lodge in Colorado to take advantage of the quiet and isolation. It's the perfect place to write. But Paul picks the wrong day to decide to head back to civilization. A blizzard quickly sweeps in, he slides off the road, flips his car and ends up seriously injured in the process. Thankfully, someone happened to see the accident. That someone has seen a lot of things since they know that Paul comes there specifically to write once a year. That same someone also frequently just sits outside of his cabin and watches, wondering what kinds of wonderful things the author is cooking up inside. It's a good thing that someone is so dedicated. Without them and their persistance, Paul would be dead. He's pulled from the wreckage, resuscitated by mouth-to-mouth and is then is thrown over his savior's shoulder and gets carted off to a warm home. 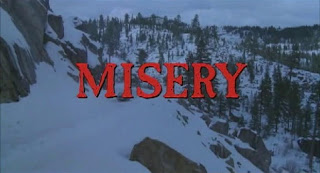 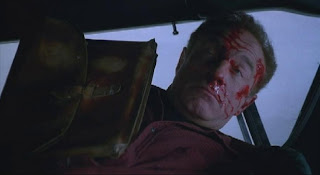 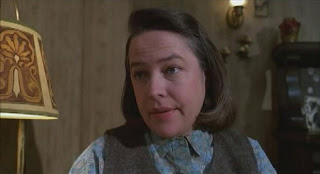 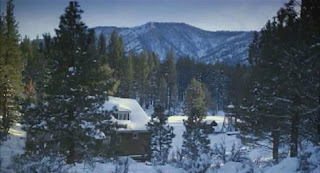 Two days later, Paul awakens in a daze to the words "I'm your number one fan." Hovering over his bed is Annie Wilkes (Kathy Bates), a plain, smiling, friendly-looking woman. Thankfully Annie is - or was - a nurse. She's stocked up on pain meds and other medical supplies so she's able to care for Paul, who has multiple compound fractures in his legs and a dislocated shoulder she's been kind enough to pop back into place. The storm's so bad that the phone lines are down and the roads are closed, so there's no possible way to get him to the hospital right away. In the meantime, Paul agrees to allow Annie to be the first person to read his unpublished latest novel. After being M.I.A. for an entire week, Paul's daughter becomes concerned and contacts his New York City literary agent Marcia Sindell (Lauren Bacall), who passes word on to Silver Creek's Sheriff, Buster (Richard Farnsworth). Buster - accompanied by his wife / deputy Virginia (Frances Sternhangen) sets out to see if they can locate Paul. Meanwhile, Paul slowly starts to come to the conclusion that the angel who saved his life and is nursing him back to health isn't quite right in the head. And that may be the understatement of the year! 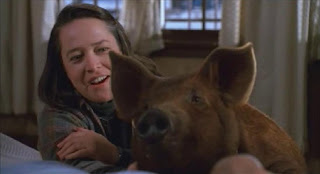 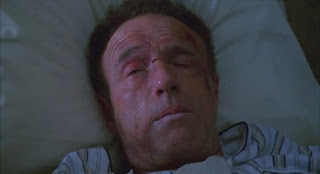 Upon reading part of his new book, Annie is offended by the amount of profanity and goes on a scary tirade about it (her venting words of choice include "dirty bird" and "cockadoodie"), but that's nothing compared to what she does whenever she gets her hands on the newly-published final installment in the Misery saga and discovers that Paul has killed off her favorite character. Paul now finds himself a very vulnerable prisoner at the whim's of a desperately lonely madwoman. Annie forces him to burn his latest novel on a grill to "rid the world of this filth;" threatening to burn him alive by squirting starter fluid on his bed. She then demands that he write a new Misery novel to be entitled "Misery's Return" in her honor and even sets up a work station for him in his room. Prone to sudden and unprovoked outbursts, Annie's go-to point whenever she's pissed off are Paul's legs, which are filled with fragile, cracked bones. The writer amazingly manages to keep his composure through the whole ordeal, devising multiple attempts to escape, including hiding his pain meds in his bed and plotting to poison her with them. He also manages to escape his room using a bobby pin to pick the lock and discovers a scrapbook full of newspaper clippings that lets him know what a monster he's dealing with. 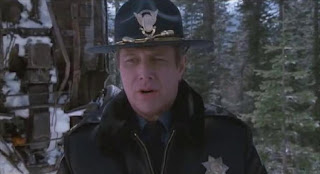 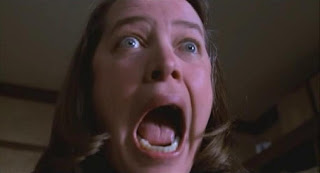 This is the movie that really put Kathy Bates on the map. Definitely no newbie in Hollywood by the time this was made, Bates had given several acclaimed performances in lesser-known films prior to this one, but considering just a few years earlier she was reduced to playing a tiny role in MY BEST FRIEND IS A VAMPIRE (1987), this film was definitely a game changer for the actress. Bates - who manages to be both very funny and very scary here - went on to win numerous awards for this performance and made history by becoming the very first actress to win the Best Actress Oscar for a horror film. She'd also go on to appear in several other King adaptations, including a cameo in THE STAND (1994) and the lead in DOLORES CLAIBORNE (1995); giving an outstanding performance in the latter that should have been Oscar nominated but wasn't. Though his performance is always overlooked in favor of Bates' star-making turn, Caan is also excellent here and his facial reactions to Annie's behavior are often priceless. 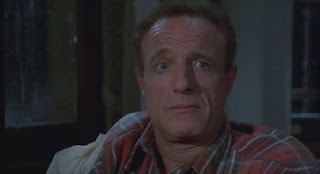 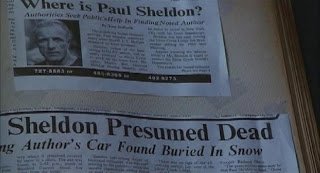 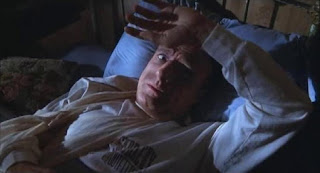 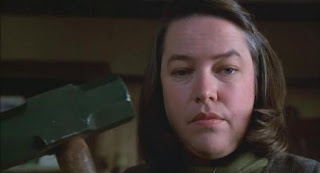 Scripted by William Goldman, for the most part this sticks pretty closely to the Stephen King source novel, though the sheriff and wife characters (who are given just enough color to contribute to the film in a positive and non-obtrusive way) were added. Director Reiner, who'd already adapted the King story into a hit film with STAND BY ME (1986), does a suberb job creating suspense, which is particularly impressive considering most of this movie takes place in just one room!

J.T. Walsh and the director (briefly seen as a helicopter pilot) have uncredited cameos. 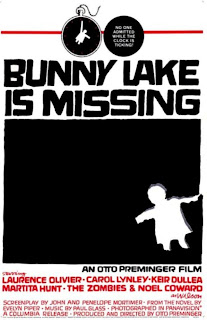 
Unwed single mother Ann Lake (Carol Lynley) and her four-year-old daughter Bunny arrive from the United States to come stay with her brother Stephen (Keir Dullea) in England. Ann drops Bunny off at a new school / day care ("The Little People's Garden School") and goes about meeting with the moving people and trying to get her things unpacked and organized. While there, she meets her eccentric new landlord Horatio Wilson (Noel Coward), a poet, playwrite, singer and alcoholic who carries his beloved chihuahua Samantha around with him everywhere. After a trip to the market, a flustered Ann heads back to the school to pick up her little girl. Problem is, she's nowhere to be found and no one who works there seems to know where she is. Actually, no one who works there even remembers seeing her, period. At least what they're claiming. The headmistress was off getting dental work done, so her inexperienced underling Elvira Smollett (Anna Massey) was put in charge for the day. During that time, a frustrated German cook - who was supposed to check in on Bunny while she was in the "First Day Room" - has quit. The school is large, extremely unorganized and seems severely understaffed, there are hundreds of children coming and going at any given time and many, many rooms to search.

Ann calls up Stephen, who promptly drives over to help her scour the school. The two start at the top floor; an off-limits area converted over to a flat where the two elderly women (lesbians?) who founded the school live. One of them is in the hospital, but the other, Ada Ford (Martita Hunt) turns out to be a perceptive and possibly crazy eccentric who sits around listening to recordings of children talking. She's working on a book about children's fantasies and nightmares and the staff apparently encourage her to stay upstairs because she may frighten the little ones. Finally fed up, Stephen telephones the police. Superintendent Newhouse (Laurence Olivier) shows up to lead the investigation. A thorough search of the school is conducted, but Bunny is still nowhere to be found. Newhouse figures she has somehow wandered out of the school and will turn up in due time. Because not all of her things have arrived from America yet, Ann isn't even able to come up with a photo of her daughter. She then remembers there's one in her passport.

Upon returning home, Ann is horrified to discover that her daughter's passport and all of her belongings have vanished into thin air. There is no evidence whatsoever that he daughter has even been in London and no sign of a break-in. Hell, there's no evidence that her daughter even exists. No application for enrollment or money receipts for payment at the school have turned up and no one in London - including students and teachers where she was dropped off - seems to have even laid eyes on the child. Either the school is lying to covering their ass or Stephen and Ann are. It's revealed that Ann was a lonely child; her parents died at a young age and she was brought up by her brother. During that time she'd created a make-believe playmate named, you guessed it, Bunny. Ann claims that she named her invisible friend and then her own illegitimate daughter after a specific literary character, but Newhouse is skeptical of both her and her brother's stories. From all indications, Stephen has always supported Ann, both emotionally and financially. Perhaps in other less-wholesome ways, as well.

Several suspects are established, particularly the odd Miss Ford, who tells Newhouse "Children are at the mercy of their parents and for the most part parents are a very bad lot" and the lecherous pervert of a landlord who just barges into the Lake's apartment, tries to come on to Ann and has a whip collection and the skull of the Marquis de Sade (!) in his home. The fact we never actually see Bunny or most of what happened prior to her disappearance is enough to keep our interest for at least the first hour. Unfortunately, the film swiftly goes downhill toward the conclusion. Whatever joys are to be had here are in the mystery aspects of the story so I'm not going to go into any real detail about who the kidnapper is or how this film ends, but trust me when I say you will seldom be left with more glaringly obvious plot holes than the ones you're left with by the end of this one. I haven't read the Evelyn Piper novel this is based upon, which was adapted by John and Penelope Mortimer, but one hopes she at least managed to tie together some of these loose ends.

Considered a classic by some (I beg to differ), this was nominated for several BAFTA Awards, including deserving nods for the cinematography and art direction. The score is also excellent. The young leads aren't always believable, but the supporting roles are all skillfully played by some very fine character actors. Hunt, Coward and Finlay Currie (who runs a doll repair shop) are particularly good in their parts. The cast also includes Clive Revill (THE LEGEND OF HELL HOUSE) as a police sergeant, Adrienne Corri (THE TELL-TALE HEART) as a teacher, Megs Jenkins (THE INNOCENTS) as a nurse and John Forbes-Robertson (who got to play Count Dracula in Hammer's LEGEND OF THE 7 GOLDEN VAMPIRES) as a hospital attendant.