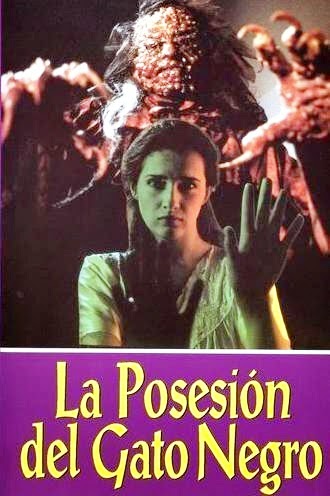 Someone could write an entire book trying to make sense out of Italian horror film re-titlings for foreign distribution. Now this'll get a little confusing, so please try to bear with me. Since Dario Argento was taking forever to conclude his "Three Mothers Trilogy" (which began with 1977's Suspiria, was followed by 1980's Inferno and then rested in limbo for nearly three decades), director Luigi Cozzi decided to step in and finish it for him. In some areas, it was advertised as the final chapter in Argento's trilogy. In others, it was released as Demons 6: De Profundis (or Demons 6: Armageddon), which makes it part of the series of films began by Lamberto Bava in 1985. However, this film has absolutely nothing to do with any of those films. This has also been given the wholly misleading title of Edgar Allan Poe's The Black Cat here in the States even though its connection to Poe is tenuous at best. So what exactly is it? A Suspiria sequel? A Demons sequel? A Poe adaptation? Actually, not really any of the above. Since Argento completed his own trilogy in 2007 with the release of La terza madre (Mother of Tears), I'd just refer to this one as a "Suspiria offshoot" that does some name dropping and borrows some of that film's mythology but is otherwise unrelated.

Now back to the movie...

Popular horror film actress Anne Ravenna (Florence Guérin) takes the lead role as Levana - a legendary witch burned at the stake in 13th Century Prague - in her director husband Marc's (Urbano Barberini) newest effort; described as an updating of Suspiria. Levana seemingly returns from the grave as a clawed, maggot-infested, lumpy-faced ghoul who causes death for the cast and crew members and makes Anne have a lot of disorienting nightmares and delusions. Adding to the fun/confusion are scenes in outer space (?!), a television set that spews guts and green slime, a helpful little girl "fairy" (played by the director's daughter Giada Cozzi) who shows up on a TV set, a neck slashing, an exploding body, sexy Caroline Munro (playing an actress here) in a bubble bath and in lingerie (sorry fellas, no nudity), a car going through a house and lots of pointless shots of black cats (the movie really has nothing to do with Poe other than that).

Cozzi's nutty movie is chock full of Italian horror movie references, as he pays due homage to the inventive directorial styles of directors Bava and Argento. Everything is drenched in bright color and the camera-work, music score (borrowing music riffs from Suspiria and even White Lion's cover version of "Radar Love") and sets are pretty good, along with special attention paid to Bava-esquire zoom shots. Though this is not really a very good movie, it's enjoyable absurd and interesting enough to hold your attention. Munro apparently didn't have a very good time on this shoot as evidenced by an article in a 1991 issue of Fangoria titled "Ripped Off in Rome," where she discusses in great detail being stiffed her salary and the numerous troubles the film faced; partially because of a shoddy co-production and distribution deal between director / producer Cozzi, producer Lucio Lucidi's World Pictures Corporation and Menahem Golan's 21st Century Film Corporation. Production had to be shut down several times due to the financing falling through in June 1989 but was picked back up and finished in September 1989. I still don't know whether Munro ever received her money or not.

The cast includes American actor Brett Halsey (Return of the Fly) as a film producer, Jasmine Maimone (who appeared in the original Demons, along with Barberini), Luisa Maneri (Body Count), Karina Huff (Fulci's The House of Clocks) and Michele Soavi in an uncredited cameo as a director. Though the film was released in Japan, Germany, Argentina (as La posesión del gato negro), Poland (as Czarny kot) and several other countries, it has never been officially released on VHS or DVD here in America, though the British and American video rights had been sold to RCA / Columbia back in 1989. The first time I ever saw it was on late-night cable TV at around 2am.

Thanks for this detailed history. I'm on a bit of a Cozzimania tour of late (I even saw PAGANINI HORROR) and am trying to find a clean copy of this. It was on Amazon Prime streaming for awhile, and I could have bought it off download for $6.99 and man I wish I had - now it's gone. At this point he sobbed. Your detailed history doesn't make it sound to appetizing but for fans of 'the Italian Ed Wood,' it's gold -the climax even takes us to the moon so Cozzi can use some more of his HERCULES effects shots.