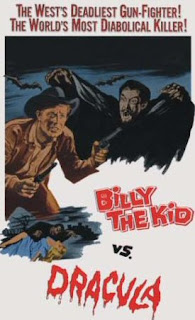 See the late, great camp champ John Carradine (then at the ripe ole age of 60) as Dracula for the umpteenth time, wandering into the Wild Wild West and setting his sights on lovely ranch owner Betty Bentley (Melinda Plowman), whose future husband just happens to be legendary outlaw Billy the Kid (Chuck Courtney). Title gives away the film’s entire plot as Dracula pursues, Betty screams and Billy saves… over and over and over again. Carradine claimed this low-budget horror comedy (which was filmed in just eight days) was his worst film, but I personally think he's done worse than this. Some of the dialogue in Carl Hittleman's silly Grade D script is mildly amusing, at least. Director Beaudine (who used to hold the record for live-action directorial credits... over 150!) also made JESSE JAMES MEETS FRANKENSTEIN'S DAUGHTER that same year, which this was often co-billed with.