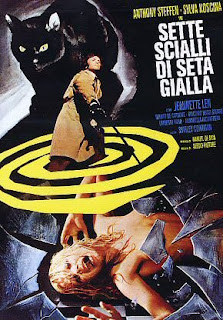 ...aka: Crimes of the Black Cat
...aka: Seven Shawls of Yellow Silk
Directed by:
Sergio Pastore
Gialli are as hit-or-miss as anything else, though some die-hard fans may lead one to believe otherwise. For every one film classified as such that's an enjoyably stylish thriller (the best seem to come from Bava, Argento and Martino), there are about three that are pedestrian, lifeless, sloth-paced, visually unexciting and completely devoid of originality. I've honestly had a difficult time trying to stay awake while watching some of these films. So, not surprisingly, I tend to disagree with others about which are actually the better films in this subgenre. This one has had a less-than-warm reception for the most part, but I actually thought it was more entertaining than many others I've seen. Why? Because it's nutty, goes OTT a few times and the killer's modus operandi is every bit as ingenious as it is ridiculous! Don't get me wrong, this is painfully derivative of many other, usually better films (Bava's BLOOD AND BLACK LACE and Argento's CAT O' NINE TAILS instantly come to mind), but since the exact same thing can be said for about 95 percent of the films this one shares company with, that really didn't bother me a whole lot. And silly as this was at times, it also had some legitimately great moments that deserve mention.

Blind pianist Peter Oliver (Anthony Steffen) decides to start his own independent investigation after his unfaithful model ex-girlfriend Paola Whitney (Isabelle Marchall) is killed under mysterious circumstances. A fashion house run by wealthy Françoise Ballais (Sylva Koscina) and her ex-con playboy husband Victor Morgan (Giacomo Rossi-Stuart), soon becomes the centerpiece for the obligatory string of cover-up murders to follow the first crime. Since Peter can't see, he enlists the aid of his assistant Burton (Umberto Raho) and fashion house employee Margot (Shirley Corrigan) to help uncover the killer. Throw in a caped, strung-out heroin addict ("Jeannette Len"/Giovanna Lenzi), a photographer, a police inspector, a temperamental black kitty cat with toxic paws and a pair of lesbian models and your list of suspects and victims is now complete.

There's the expected backstabbing, blackmail and adultery to help provide a motive, plus some nudity and gore thrown in for good measure. The cast isn't too bad (Steffen and Lenzi both do good jobs here) and there are some pretty solid scenes, especially one taking place at some outdoor recycling facility (I think that's what it was) full of broken glass. Also worth mentioning is an awesomely gory shower slashing that's one of the nastiest (and best) set pieces in the entire giallo oeuvre. On the down side, the ending feels very rushed and the score isn't quite up to par, but all in all, this was a decent enough effort that should entertain its target audience.
★★1/2
Posted by The Bloody Pit of Horror at 4:31 AM