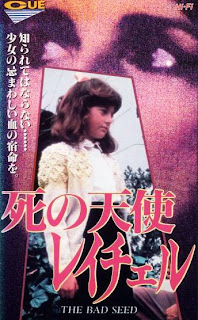 Directed by:
Paul Wendkos
Surprisingly watchable made-for-TV remake of the 1956 classic, which boasted the then-fresh concept of an angelic yet psychotic child and was based on a popular stage play by Maxwell Anderson. In this version, the father isn't away in the military (he's dead), some flashbacks have been added to try to flesh out the 'born evil' concept of the storyline (which apparently skips a generation in this family) and the original downbeat ending (which had to be changed in the original film version) is retained here. Blair Brown (who'd become better known for playing the title role in the TV series The Days and Nights of Molly Dodd a few years later) stars as the overly protective mother of a psychotic pre-teen daughter Rachel (Carrie Wells) who does things like beat a kid (Chad Allen) to death with her shoe and torching the alcoholic, sleazebag handyman (David Carradine), all while pulling the wool over nearly everyone elses eyes, including doting grandpa Richard Kiley and worldly neighbor Lynn Redgrave (who's star in a made-for-TV remake of WHATEVER HAPPENED TO BABY JANE? in 1991).
.
Brown's performance is fine, but young Wells (who tries her best) is absolutely no match for the original film's Patty McCormack. The showy role of a victim's grieving mother (played by Eileen Heckart in the original, and Carol Locatell here) has also been widdled away to almost nothing. The cast also includes David Ogden Stiers as Redgrave's husband, Anne Haney (doing fine work here) as the stuffy school administrator and Christa Denton (THE GATE) as an older Rhoda Penmark (seen as a in some effective flashbacks).
.
It premiered on ABC and has never been released on video or DVD here in the U.S.. However, in Japan it was released on VHS by Warner Bros. (pictured above) it is still occasionally shown on TV (try checking the program schedule for The Lifetime Movie Network).
★★
Posted by The Bloody Pit of Horror at 9:58 PM