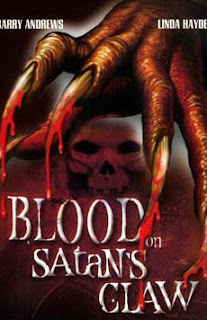 ...aka: Devil's Skin, The
...aka: Devil's Touch, The
...aka: Satan's Skin
Directed by:
Piers Haggard
Bizarre and highly effective witchcraft thriller focuses on a small farming village in 17th Century England ripped apart after a young plowboy unearths a strange-looking skeleton. Soon, most of the teenage population (plus some of the adults) begins to worship Satan and hold human sacrifices. They're headed over by the wonderfully evil (and very attractive) Linda Hayden as the ironically named Angel. A scene of her presiding over a gruesome (and highly disturbing) rape/murder sequence is a memorable highlight of this overlooked gem, which also boasts excellent period detail and art direction, atmospheric photography, an unnerving score and strong performances (especially from Hayden and Patrick Wymark, who's also excellent in one of his final film roles as a stern, God-fearing judge). There's even an appearance by Satan himself, who appears here as a growling, hairy, clawed beast. It's theme, rural setting and cast of youthful Devil-worshippers may remind one of the CHILDREN OF THE CORN (1984), but while that film was moronic and ultimately ineffectual, this one's fascinating; very vivid, haunting and lurid, with a pure horror atmosphere you don't come across too often.
.
Made by the short-lived Tigon British Film Productions, who were around long enough to put out at least two excellent genre films; this one and WITCHFINDER GENERAL (1968). The cast includes Barry Andrews (DRACULA HAS RISEN FROM THE GRAVE), Michele Dotrice (AND SOON THE DARKNESS), Tamara Ustinov (Peter's daughter) and Simon Williams.
★★★
Posted by The Bloody Pit of Horror at 10:15 PM