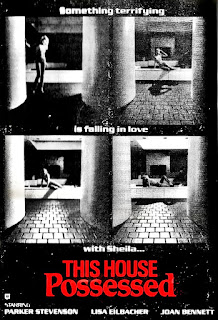 
Fresh off his success in The Hardy Boys / Nancy Drew Mysteries TV series, a then 28-year-old Parker Stevenson formed his own production company (Parker Stevenson Productions Inc.) and made a two-picture deal with ABC TV. Part of the agreement was that he'd star in one of their films in exchange for him getting to produce the other through his company. This was the first of those and I assume the second was the 1983 action / comedy Shooting Stars, which stars the actor and was also made for ABC TV. However, I can find no evidence that Stevenson's company produced that film. In fact, I have no clue what Stevenson's company ever produced, if anything. I found a California registry for the company that states it was active from 1983 until 2010 when it was dissolved but that and a few newspaper articles are all the evidence I have that the company ever even existed. The company isn't listed anywhere in the credits of this film, and Stevenson isn't credited as the producer (writer David Levinson is). 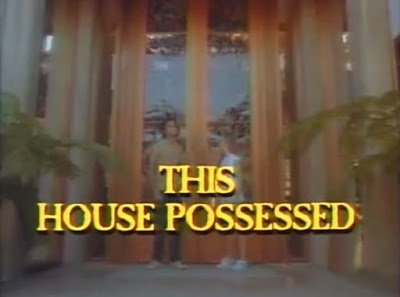 Looking for a place to mess around, teenagers Donny (John Dukakis) and Holly ("Mandy" [Amanda] Wyss, just a few years before becoming Freddy's very first victim in A NIGHTMARE ON ELM STREET) hop a fence and go to an abandoned mansion. They're watched by security cameras and the haunted house itself seems to retaliate by sending a snake-like water hose through the grass to spray the trespassers with hot water until they run off. Elsewhere, popular "rock singer" Gary Straihorn (Stevenson) performs a few songs in a smoky nightclub and is being watched by a TV in the evil home. What's even stranger is that this isn't a televised performance and there are no cameras in the club, yet the performance is still showing up on the monitors there, as do several later events in Gary's life.


While singing the disco-ish "Sensitive You're Not" in a silk shirt unbuttoned all the way down to his waistline, Gary suddenly passes out and is taken to the hospital where a doctor (David Paymer) drills his agent, Arthur Keene (Slim Pickens), about his client's extracurricular activities. Arthur insists Gary lives a clean lifestyle and is drug and alcohol free. The diagnosis? Total physical exhaustion and mental fatigue. In other words, he's working too hard. The doctor recommends a long vacation to recuperate. 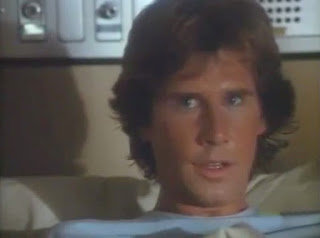 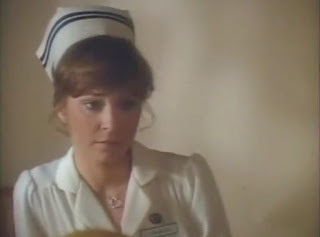 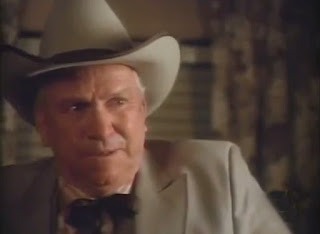 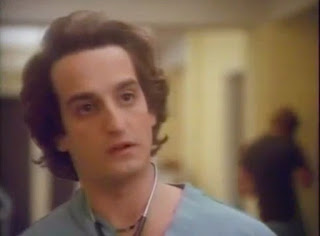 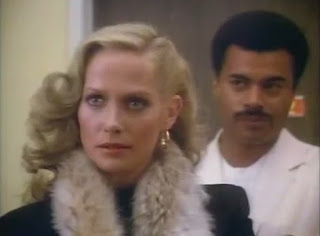 While at the hospital, Gary meets compassionate young nurse Sheila Moore (Lisa Eilbacher), who waits by his bedside until he falls asleep after a nightmare, gives him back massages (!) and keeps him company. She also apparently enjoys making significantly less money than she could as she "used to be a physical therapist before I got into nursing." Seeing how PT school takes around 7 years to complete, the 24-year-old Eilbacher would have had to have started college at age 17 and not even had a chance to really work as a physical therapist before "switching" to nursing. But I'll let that one slide.


The important thing is there's a mutual attraction between the two, even though Gary is sort-of seeing pill-popping model Tanya (Shelley Smith) and Sheila is sort-of seeing some jerk who refuses to marry her. Sheila promptly tells her boyfriend she's done with him before agreeing to take on a two week assignment being Gary's live-in nurse / masseuse. She says, "I could use the money." I say, "You'd make way more working as a physical therapist than a nurse, ya dummy." Gary and Sheila promptly hop in a car and hit the road with no real destination in sight. The small town of Rancho Santa Fe seems like a nice enough place, so Gary goes to a real estate agent (Jan Shutan) to set him up with a rental. You'll never guess what home they end up at! 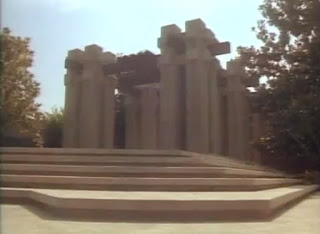 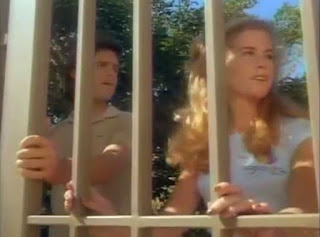 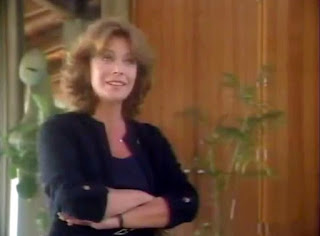 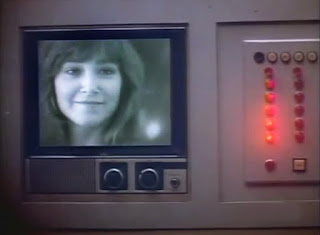 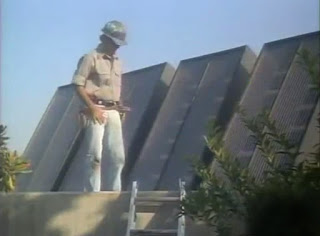 The haunted mansion has an air filtration system so you don't even have to dust and other provisions so cleaning is seldom necessary, windows made of unbreakable glass, a heated indoor swimming pool, security monitoring in every room as well as outside, automatic outside lights and sprinklers and other luxuries. Everything is (supposedly) powered by solar energy. The only real catch is that little is known about who actually built the house and why someone would build a beautiful mansion out in the middle of nowhere and then seemingly abandon it. Nevertheless, Gary likes the place so much he tells the realtor he doesn't want to rent it. He wants to buy it. 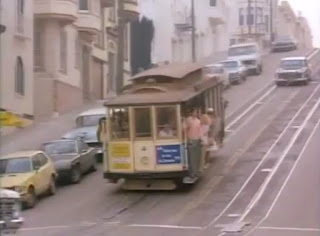 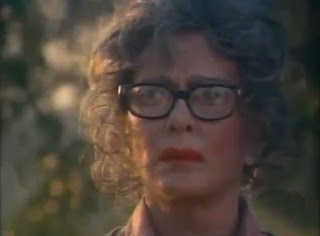 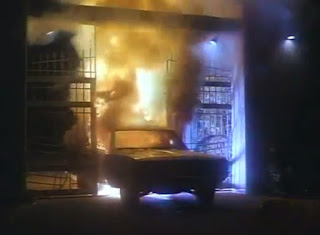 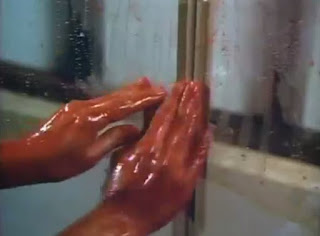 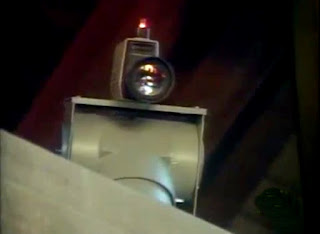 Hoping for some peace and quiet, Gary starts working on new music for an upcoming European tour. However, he's frequently struck down by sudden terrible headaches. Sheila, who can't remember the first seven years of her life and doesn't know who her real parents are, hears someone calling for a woman named Margaret late at night. During trips to town, she keeps running into a local eccentric known only as "The Rag Lady" (Joan Bennett) who insists Sheila's real name is Margaret and keeps spouting things like "You shouldn't have come!" and "You mustn't stay here!" as she pushes around a shopping cart full of garbage. Just how is Sheila connected to the house? And what does the house, which seemingly has a mind of its own, want? 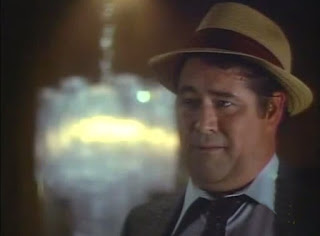 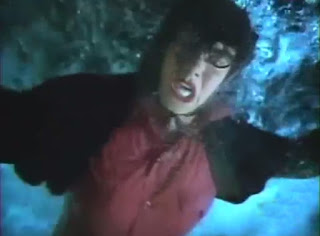 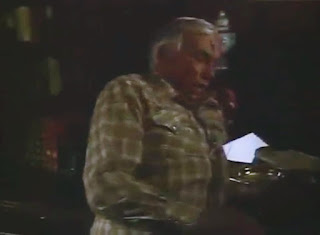 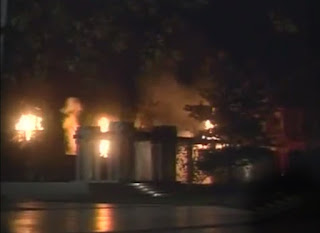 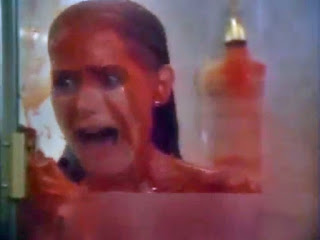 With this TV movie you basically get a mild mystery with Omen-style death scenes and just as much, if not more, time dedicated to the blooming love between the two main characters. With the house essentially having a life of its own and controlling everything inside, plus all of the cameras, monitoring and surveillance, this probably seemed a lot more high tech back in 1981 than it does now. It's also pretty obvious the writer took quite a bit of inspiration from DEMON SEED (1977). Still, this is at least passable and features pretty good performances, decent chemistry between the leads and a few fun horror scenes. A woman is caught in a blood shower (a very bloody blood shower!) and there's also death by shards of glass from an exploding mirror, a car blowing up after being crushed in the gate and someone getting boiled alive when the house cranks up the heat in the pool. 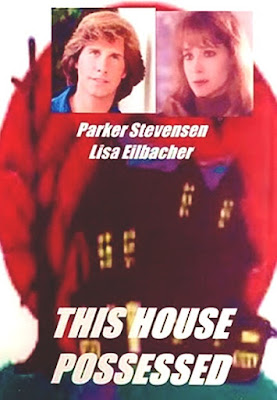 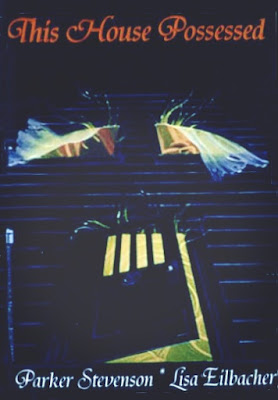 This was shot under the title American Gothic and filmed in San Diego over a three week period at a 25 million dollar mansion sitting on 200+ acres of land. Former teen heartthrob Stevenson gets to poke fun at Donny and Marie Osmond's music (he was a guest star on their TV show in 1978) and then perform three cheesy songs of his own. The cast also includes K Callan as a librarian, Barry Corbin (in just one brief scene) as an asshole policeman and Phillip Baker Hall (in an even smaller part) as a clerk.


Among the rarer genre TV movies of the decade, this was never officially released on home video here in America nor, it appears, most other countries. The one exception may be Germany. The film is listed on numerous German databases under the titles Das Haus der tausend Augen ("The House of a Thousand Eyes") and Devil's House: Wenn Mauern töten ("Devil's House: If Walls Kill), which also claim this was released on VHS on the EuroVideo Medien label in 1988. However, I've been unable to find a video box scan from that particular release to verify it. It's now made it onto the bootleg circuit (and onto Youtube) thanks to a rare airing on Turner South Network back in November 2004 at 1am. It was given the TV-14 rating.