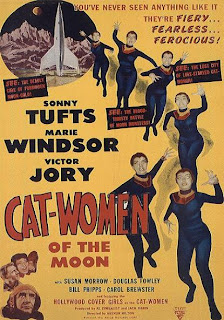 
Awful special effects, chintzy sets, bad acting, extremely corny dialogue and an utterly ridiculous plotline, plus the surefire schlock title, have all helped to ensure that this would go down as a camp classic. Atomic Rocket 4 sets off on a 200,000 mile journey towards the moon. The five member crew - Commander Laird Grainger (Victor Jory), co-pilot Kip Reissner (Sonny Tufts), navigator Helen Salinger (Marie Windsor), radio operator Doug Smith (William Phipps) and engineer Walt Wallace (Douglas Fowley) - waken from their deck chair-like seats and immediately get down to business. The Commander wants everything "by the book," but doesn't seem to mind that Helen grabs her compact and brush to make sure she's presentable as soon as she awakens. Their ship is hit by a meteor, so Kip must bravely enter the "atom chamber" to extinguish a nitric acid fire. Helen, who's caught between her affections for the Commander and Kip, is having the strange feeling of deja vu. She feels like she's been on this journey before. Or that she's dreamed of it. She even seems to know a safe landing spot on the dark side of the moon for them to land on once they reach their destination. 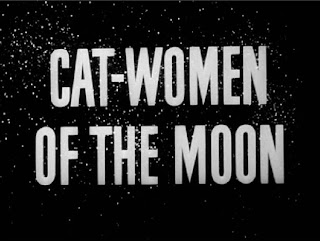 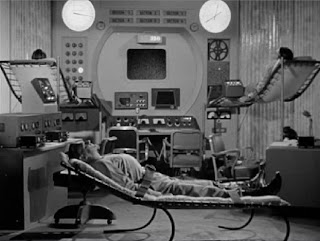 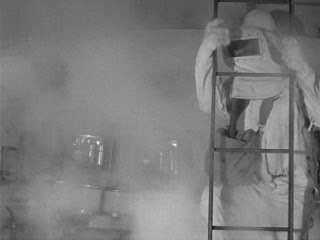 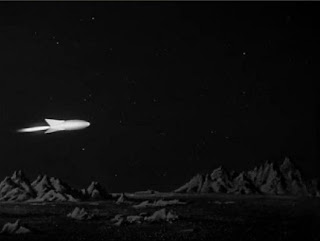 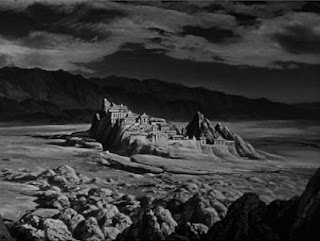 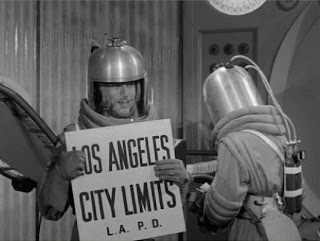 Once safely on the moon, everyone slaps on their space suits for a little exploring. Helen's ESP kicks in yet again and she knows of a cave that's nearby. After ducking under a flaming meteorite (!), they find the cave, discover there's both water and oxygen inside and remove their suits so Helen can finally stop wining about how heavy her boots are. After thwarting several giant-spiders-dangling-from-the-ceiling-on-strings attacks, Helen insists they keep on going until they reach the other side of the cave. The fact someone has stolen their spacesuits so they can't go back to their ship solidifies the decision to move forward. The cave opens out into a field where there's sky, clouds, grass and a large palace. Yes, there's "another world in the bowels of the moon!" And it's full of (gasp!) Cat-Women. with pulled-back jet black hair, Eddie Munster hairlines, thick, drawn on eyebrows, wild eyelashes and skin-tight black suits. They immediately attack the group and try to steal their gun. And then Helen wanders off somewhere. The men decide to wait it out until she comes back... and when she does she has company. 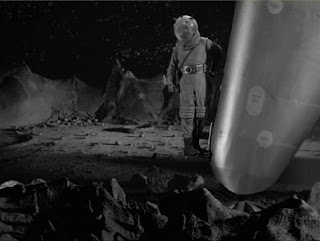 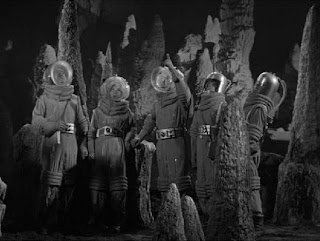 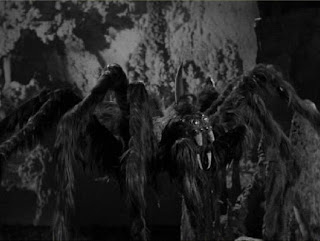 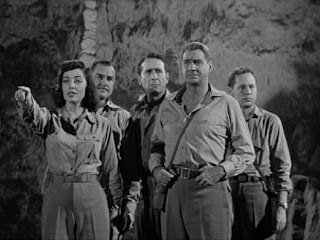 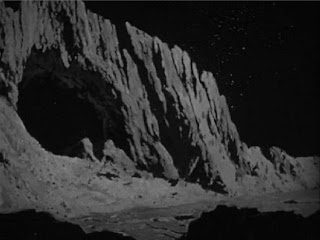 Helen goes to meet with Alpha (Carol Brewster), queen of the Cat-Women, plus her second-in-command, the violent Beta (Suzanne Alexander), and another, nicer one named Lambda (Susan Morrow). The Cat-Women confide in Helen that they "have no use for men" and can disappear at will, communicate telepathically and project their thoughts long distances, which is what they've been doing to Helen to lead them there. The ladies claim to be peaceful beings, promise to give the astronauts back their space suits the next morning and decide to show them a bit of their hospitality in the meantime. Before you can say "May we serve you, Earth men?" the kittens' engines start purring and they use their feminine (feline?) wiles to cozy up to several of the guys; serving them wine and a honeydew melon-like substance. Naturally, the alien women have more devious plans in store for out stranded space travelers; namely learning how to operate the ship so they can steal it. Their master plan is to go to Earth, get knocked up and then return to the moon. 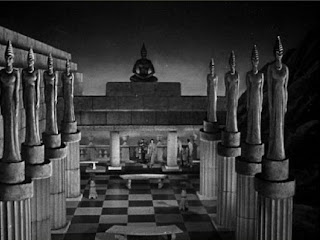 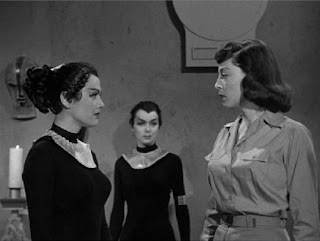 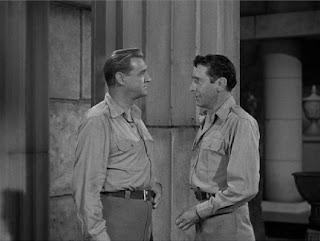 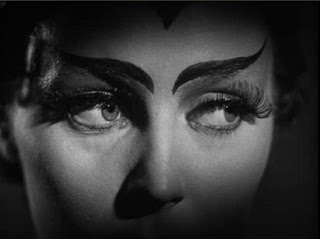 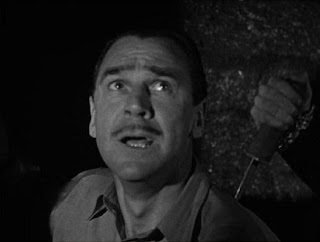 Beta seduces Walt with promises of gold before (literally) stabbing him in the back. After a discussion about going to the beach and drinking some Coca Cola, Lambda ends up actually falling in love with Doug. Yes, the girls may be wise in the ways of extensive eye makeup, checkerboard flooring and Roman architecture (plus, was that a Buddha I spotted atop their palace?), but they do not know the ways of human love. Nor do most really care. Helen, under the mental control of the Cat-Women, attempts to turn the Commander and Kip against one another to get information about how to operate the ship. Will the Cat-Women claw their way to victory or be outsmarted by the Earthlings? 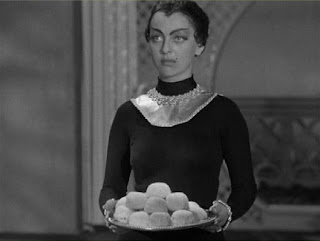 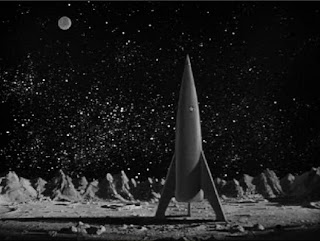 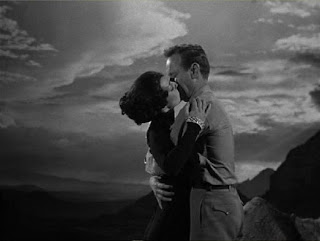 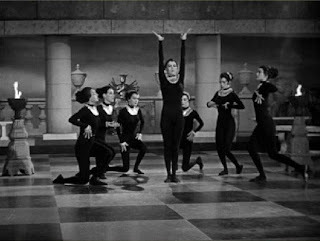 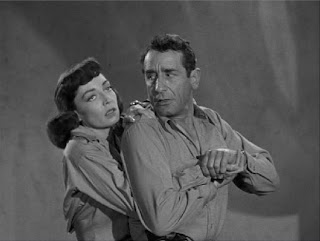 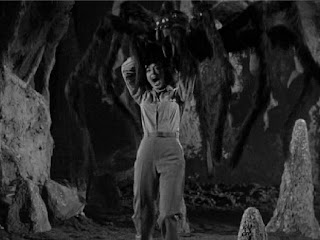 Originally released to theaters in 3D and boasting an Elmer Bernstein (!) score, this is side-splittingly dumb stuff. Even though I have to give this the appropriate rating here based on its quality, I'm not ashamed to admit that I thoroughly enjoyed every second of it. It's really a lot of fun. The ending is abrupt and definitely could have used a little more oomph, but the thrilling and seductive dance of the Cat Ladies more than makes up for that, am I right?

SBIG
Posted by The Bloody Pit of Horror at 11:22 PM No comments: 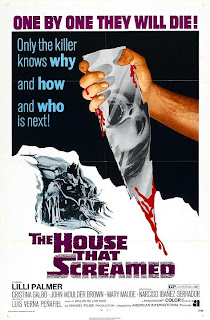 
Madame Fourneau (Lilli Palmer) runs her all-girls boarding house with an iron fist. Every girl, aged 15 to 21, who is entrusted in her care is to be well-mannered, ladylike and, most importantly of all, obedient. She expects all her girls to be impossibly well-rounded. Aside from book studies, each student must learn how to sculpt and paint, play a musical instrument, keep in shape with one hour of mandatory ballet daily and learn how to garden and cook in case she becomes a housewife one day. At Fourneau's boarding school it's all about healthy minds and healthy bodies. Just don't show too much individuality or spunk. Or ask too many questions about all the strange things that go on there. Fourneau likes the keep everyone in check. For those who don't play by her rules, punishment is in order. And when one starts to realize that Madame Fourneau probably missed her higher calling being a prison warden, you can probably guess what kinds of questionable tactics she uses for punishment.

One such trouble-maker is Catherine (Pauline Challenor), who is put in solitary confinement for sassing and then stripped and whipped for refusing the apologize. Madame doesn't really even have to get her hands dirty. Her favorite student Irene (Mary Maude), who's her favorite because she does whatever her superior wants, seems to derive a great deal of pleasure from being the one to get to dish out the abuse to her fellow students. On the second floor of the boarding house is Fourneau's teenage son Luis (John Moulder-Brown), who isn't allowed to fraternize with the girls or anyone else for that matter. Just coming of age and showing an interest in girls, Fourneau "forbids" him from having lustful thoughts, says not to mess around with any of the girls because they're "poison" (most living there are 'wayward' types needing discipline) and tells him "You need a woman like me." Coincidentally, this is the fourth movie I've watched in two weeks concerning someone with smothering mommy issues. Let's just hope poor Luis doesn't go down the same path as Leo Kroll or Ezra Cobb.

Cristina Galbó (from LET SLEEPING CORPSES LIE and a few other notable Euro-horrors) plays the virtuous daughter of a prostitute sent there with no knowledge that three girls have already mysteriously disappeared from the school never to be seen or heard from again. One of the youngest students, Isabel (Maribel Martín), who's been secretly meeting with Luis, receives keys and a note from her would-be suitor to meet him in the greenhouse late one night. She doesn't come back. More girls follow suit, especially those who try to leave or run away.

This entire thing is laid out almost exactly like a overheated women-in-prison drama with representations of all the usual characters you'll find in one of those films, from the evil matron to the lesbian queen bee who gets all the special privileges to the nubile (and in this case, virginal) innocent thrown in with the wolves. And it's laid out this way very consciously and deliberately. La Residencia is really about the dangers of pent-up sexuality. The all girl's school - as run by Fourneau - is painted as a suffocating hotbed of mannered sexual repression. A bunch of lonely and 'of age' schoolgirls (who draw lots to see who gets to sneak out and have sex with the guy who delivers wood once every 3 months) trapped in an oppressive, stuffy, claustrophobic environment headed over by a repressed spinster who, in turn, represses her son and keeps him locked away upstairs like a dirty little secret. It's no wonder someone's gone mad in that kind of environment! At one point a character tells Fourneau she runs the place too much like a prison (aside from the fact she makes the girls wear nightgowns when they shower!) and there are numerous shots of the girls shot from behind things like bedposts to allude to prison bars.

Going into this film knowing it involves a psycho targeting young ladies may raise certain expectations, but those are surely going to be dashed. This is actually quite mild and relatively non-exploitative given the premise. There's no nudity and very little violence or blood. The few murder scenes (which some believe influenced the giallo and slasher film movements) are stylishly shot and edited, with good use made of overlapping frames and slow motion. A dowdy, dark, earthy color scheme helps to enhance the atmosphere and - variable English dubbing aside - most of the performances are very good. One-time Hollywood star Palmer is perfect as the uptight and abusive principal. but the real surprise here is Maude, a talented but little-known British actress who manages to steal every scene she's in. Victor Israel, the go-to-guy for creepy bit parts and red herrings in Euro-horrors, is the school's handyman. Francisco Braña is listed in the opening credits but I don't recall ever seeing him.

Originally released in the U.S. as The House That Screamed, which was slightly trimmed to reduce the whipping scenes and amount of implied lesbianism. This is the same cut used by Shout! Factory for their 2007 DVD release (which is hosted by Elvira). The full, uncut version (released in Australia and what I viewed) runs 102 minutes. Director Ibáñez Serrador also made the memorable WHO CAN KILL A CHILD? (1975).