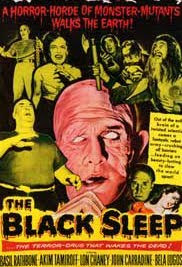 Usually the recipient of very negative reviews (nonsense!), this is great fun for classic horror fans and nowhere as bad as its reputed to be. Wrongly convicted of the murder of a money lender, Dr. Gordon Ramsay (Herbert Rudley) awaits his death on the gallows. The day before his execution is to take place, aristocratic scientist Sir Joel Cadman (Basil Rathbone) offers Ramsay a second chance at life under a new identity via "the black death;" a dark powder from the West Indies that will cause just a temporary demise as long as an antidote is administered within twelve hours. With nothing to lose, Ramsay signs over burial arrangements to Cadman, agrees to assist him in his experiments upon his revival and takes the drug. After dying and being brought back, Ramsay accompanies Cadman to his secluded castle home and the two begin their brain experiments on cadavers. Helping the men are a pair of surgical nurses; older, dedicated Daphne (Phyllis Stanley) and younger Laurie (Patricia Blair), who always seems to be on edge. And it's no wonder she's a bit jumpy... Every time she's left alone, a grunting, limping mental defective named Mungo (Lon Chaney, Jr.), who Cadman allows to freely wander around, tries to strangle her!

Ramsay discovers that Cadman isn't actually using cadavers in the experiments, but living humans, who have been drugged, kidnapped and dropped off by gypsy tattooist Professor Odo (Akim Tamiroff, providing much welcome comic relief). He also discovers that Cadman's chief objective with his experiments is to gain knowledge that will help him revive his wife Angelina (Louanna Gardner), who's been in a coma for eight months. A secret panel hidden behind the fireplace holds another secret. Behind it is a long staircase. Up leads to the surgical room, but down leads to a torture chamber full of disfigured, deranged cast offs from Cadman's previous experiments.
Aside from Rathbone and Chaney, the film completes its awesome all-star cast with supporting roles for Bela Lugosi, Tor Johnson and John Carradine. Lugosi (looking pretty feeble in his last role) plays mute butler Casimir, who has absolutely nothing to do other than stand in the background and open and close doors as people come and go. A blank-eyed Johnson has a small part as a basement dweller and, just like Lugosi and Chaney, is given no dialogue. Carradine fairs best in a brief, but hysterically funny role as Bohemund, a deranged profit. Looking like he just walked off the set of THE TEN COMMANDMENTS in a long wig, long beard and robe, the actor spends his screen time ranting, raving and beating people over the head with his walking stick!
Rathbone and Tamiroff both give great performances, but the real surprise here is Hudley, who receives sixth billing to all the genre greats, yet easily manages to hold his own with a natural and appealing performance. It's too bad the actor would never appear in another genre film. The film is set in 1872, though the production isn't elaborate enough to ever stray from the cheap looking sets. The brain surgery sequence is very well done, though, and surprisingly grisly for the time, with Rathbone poking and prodding inside a victim's head. Cerebral fluid even gushes out at one point! The make-up designs on the basement mutants are minor but passable. The ending is hectic, rushed and sometimes unintentionally funny, but one thing it's not is boring.
.
All things considered, I can say with some certainty that most horror buffs will get a kick out of what they see here... granted they can find a copy. As of this writing, the film has never been released on video or DVD. Your best bet is checking the program guide for Turner Classic Movies, who air it every once in awhile.
★★1/2
Posted by The Bloody Pit of Horror at 11:36 PM 2 comments: 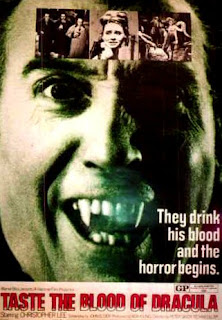 
The fifth Hammer Dracula entry - picking up right where DRACULA HAS RISEN FROM THE GRAVE (1968) left off - is a step back for the series. The last time we saw the evil Count (Christopher Lee), he was impaled on a large bronze cross and disintegrating to a bloody mess at the base of his mountaintop castle home. Greedy Weller (Roy Kinnear) somehow stumbles onto the scene just in time to witness the entire thing and makes sure to take a few souvenirs back with him to his antique shop. Meanwhile, three middle-aged, upper-class married men; William Hargood (Geoffrey Keen), Samuel Paxton (Peter Sallis) and Jonathan Secker (John Carson), are looking to escape from their humdrum family lives by paying their weekly visit to a neighborhood brothel. There they meet a handsome young aristocratic man - Lord Courtley (Ralph Bates) - who promises to reward them with excitement if they'll accompany him to a few places about town. Their first stop is an antique store to buy Dracula's cloak, pendant and a vial of his powdered vampire blood. Next up is an abandoned church, where Courtley will perform a ceremony to resurrect the count. He slices his hand and drips blood into the powder, which swells into a full glass of bubbly vampire blood. The three older men chicken out on drinking it, but Courtley obliges, starts convulsing on the floor and is then beat to death by the three men, who vow to keep it a secret.


But the sins of the father are about to revisited upon each man's entire family as Count Dracula, resurrected from Courtley's ashes, comes back to destroy them all. William is shown to be the ultimate hypocrite and manages to be a more imposing and unlikable presence than Lee! A church-goer who claims he's off doing charity work while he's actually off with his buddies at the whorehouse, William is not only a liar and hypocrite, but an abusive alcoholic who bosses his weak wife Martha (Gwen Watford) around and accuses his cherubic daughter Alice (Linda Hayden) of being a "harlot" for simply talking to a boy. The boy - Paul (Anthony Corlan) - is actually Samuel's son, who's in love with Alice (and vice versa). Samuel also has a daughter -Lucy (Isla Blair) - who is being courted by Jonathan's son Jeremy (Martin Jarvis). Both daughters become entraced by the vampire and are used to help lure the men to their deaths.


Unfortunately, despite acceptible performances and production values, this chapter never really seems to take off. Both the characters and the scenarios said characters find themselves in seem dull and recycled. The exceptions here are Bates and Hayden. Bates vividly portrays a dashing, arrogant eccentric and his black magic scene is a nice departure from the norm. Hayden also makes an impression for her ability to switch from baby-faced innocent to evil, voracious seductress. It's easy to see why both actors - making their genre debuts here - would become familiar faces in the British horror industry of the 70s. Lee on the other hand has just a few lines and seems to have even less screentime than he did in the previous films. No wonder he was getting fed up playing the part at this stage in his career! Hammer regular Michael Ripper pops in briefly as a police inspector. 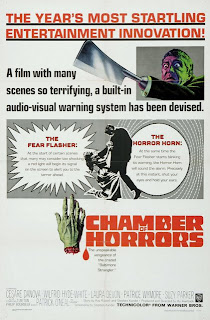 Directed by:
Hy Averback
Warner Bros. originally commissioned this project to be the pilot episode for a supernatural detective series to be titled "House of Wax" but the film was deemed too violent and disturbing for network TV. New scenes were then added to boost the running time and a pre-credits sequence (narrated by William Conrad) explaining the also newly-added gimmicks "The Horror Horn" (an alarm urging people to close their eyes and cover their ears) and "The Fear Flasher" (flashes of red light heeding a warning that things were about to get violent) were added so the film could play theatrically instead. Surprisingly enough, it all comes together extremely well thanks to fine production values, good writing and an excellent cast.
.
Handsome, suave, wealthy lady killer Jason Cravette (excellently played by Patrick O'Neal) is terrorizing Baltimore; strangling young ladies and then marrying their corpses! But his reign of terror seems to end after he's apprehended by authorities and sentenced to die. While being transported elsewhere on a train, he's secured to a heavy steel wheel, manages to unscrew it, get his hands on an axe and leaps off the train into the river below. With his arm still cuffed to the wheel, Jason starts sinking to the bottom and is forced to use the axe to chop off his hand! The authorities assume he's dead, but they're wrong as Jason actually managed to survive and is hiding out in New Orleans. There, he gets a special feature made for his arm stump; a base where a detachable hook or meat cleaver (!) can be placed, hires a beautiful, oblivious hooker (Laura Devon) to help him and then returns to Baltimore to get revenge on those who had him put away. Meanwhile, a pair of amateur sleuths; debonaire ladies man Anthony Draco (Cesare Danova) and his aged partner Harold Blount (a wonderful Wilfrid Hyde-White), investigate when a local judge turns up missing. The men also happen to work at the House of Wax exhibit, giving guided tours and lectures about famous murderers.
.
I personally think the premise would have actually made for a great series myself, but since that never happened we can at least thank Warners for getting an excellent print of this out on DVD. It's very entertaining, looks great, has a nice period setting and the roster of character actors give it their all. The standouts are clearly O'Neal and Hyde-White, though Jeanette Nolan (as the killer's aunt), Philip Bourneuf (a police detective), Tun Tun aka Jose Rene Ruiz (a Mexican dwarf character actor who plays another worker at the museum) and Marie Windsor (a whorehouse madam) do nice jobs, as well. The cast also includes Suzy Parker, Wayne Rogers, Richard O'Brien and Berry Kroeger. Also look for an unbilled Tony Curtis in a cameo.
★★★
Posted by The Bloody Pit of Horror at 2:48 PM No comments: