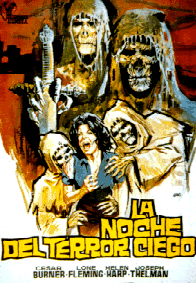 
At times an interesting spin on your standard zombie movie, at other times a senseless mess... this little Euro zombie flick was nonetheless a big hit in Europe, managed to acquire a cult following and spawned three sequels; EL ATAQUE DE LOS MUERTOS SIN OJOS (1972; aka RETURN OF THE EVIL DEAD), EL BUQUE MALDITO (1973; aka THE GHOST GALLEON) and LA NOCHE DE LAS GRAVIOTAS (1974; aka NIGHT OF THE SEAGULLS). Tombs opens with a group of hooded, blood-drinking knights trying a blonde woman up to a rack, slashing her open with swords and then drinking her blood. A not-too-seamless transition brings us to present day when Betty (Lone Fleming) meets up with old college roommate Virginia ("Helen Harp"/Maria Elena Arpón) and her male companion Roger (César Burner) at a Lisbon pool. The three decide to go camping together and hop a train that will take them to their destination. Before you know it, assorted jealousies and a lesbian flashback lead Virginia to jump off and spend the night alone in an eerie old castle. Skeletal, eyeless zombies (who are the killer cult from the opening sequence and often referred to as 'The Knights Templar' by fans even though that term is never used in the film) kill her. When Betty, Roger and others go to the castle to investigate, they're faced with a similar fate...

Some may be shaking their heads at my low rating, but first of all, I need to point out that I have only seen the VHS release of this film from Paragon Video (released in 1986) and have not yet gotten around to seeing the uncut re-mastered version available from either Anchor Bay and Blue Underground. As is, the tape is poorly dubbed, poorly transferred and seems to have been heavily cut. I'm not sure if the train finale was intact or not, but it was a real butcher job on the version I saw and is left nearly incomprehensible. Then again, there are scenes and transitions that I couldn't imagine possibly being good under any circumstances. For example, when Betty is being raped she cries, screams and puts up a fight, then when it's all over, she acts as if nothing had even happened. On the plus side, the skeleton-zombie design is good, there's a decent score and a few picturesque settings and crumbling castle backdrops to give this a nice Gothic atmosphere.
.
Despite the myriad production/ continuity problems I encountered, I'm certainly willing to give this another try now that better versions are available. I'll try to get to that here soon and finish up the series with a viewing of the fourth film (which I haven't seen yet). Also in the cast are José Thelman (who appeared in three other horrors from the same director, including the second Blind Dead sequel), Verónica Llimera (HATCHET FOR THE HONEYMOON), Francisco Sanz (LET SLEEPING CORPSES LIE), María Silva, Antonio Orengo and Britt Nichols (from several Jess Franco films).