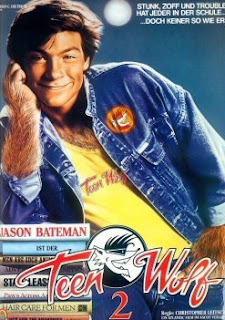 Directed by:
Christopher Leitch
Producer Kent Bateman (who had directed the schlocky gore flick THE HEADLESS EYES for porn producer Henri Pachard back in 1971) gave his son Jason Bateman (then a popular teen heartthrob from the Valerie TV series, which was also produced by Kent) the lead in this sequel. Thanks dad! Jason plays Todd Howard, cousin of the character played by Michael J. Fox in the original, a college student (studying crustacean reproduction?!) and amateur boxer, who wins the girl of his dreams and in the ring thanks in part to becoming a werewolf. Lifeless, unfunny and annoying rehash of the original; just another one of those films made to squeeze some more money out of an idea that wasn't any good in the first place. It also wastes perfectly good supporting players James Hampton and Mark Holton (both repeating his role from the original), Kim Darby, John Astin and Kathleen Freeman. Daddy Bateman also backed the film MOVING TARGET (which was made for TV) and produced and directed BREAKING THE RULES (which wasn't) for his son to star in.
NO STARS!
Posted by The Bloody Pit of Horror at 11:35 PM