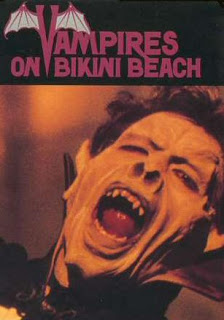 ...aka: Vampires on Bikini Beach


In Venice, California, a bunch of vapid 20-somethings ("This killing stuff is really making me feel weird. Can we change the subject?") spend their days bouncing around on the beach and their nights hanging out in neon pink lit clubs listening to Journey knock offs and ordering Screaming Orgasms. A bunch of young women are being murdered in the area; their bodies marked with puncture wounds on the neck and each drained of blood. Rock band drummer and computer expert "Weird Harold" (Todd Kaufmann) thinks it's a vampire, but no one seems to believe him except for bubbly bikini shop worker Judy (Jennifer Badham). While walking through an alley, their friends Bob (Stephen Mathews) and Kim (Nancy Rogers) bump into a couple of hooded cultists, who drop a book as they pass by. Kim takes it home with her and it starts glowing and smoking, so they take it to a bookstore owner who tells them they're in possession of "The Book of the Dead," which was used by a cult of demon-worshippers in the Middle Ages. They leave it with priest Dr. Gower (Jacques Dury) to decypher some symbols, but he's murdered and the book disappears again. The man behind it all is a vampire named Falto (Marius Olbrychowski) who wants to find his perfect mate with his "army of the dead;" pale-faced zombie henchmen led by bat-faced Demos (William Hao).
.
There are two syrupy love montages, several scenes at the club where a band performs two full songs (such as "Loaded With Love Tonight") and one bikini dance montage to help eat up time. The acting's terrible, it's boring and not even good for unintentional laughs. It can't seem to make up its mind who the protagonist is and one of the girls narrates the film (likely to try to make some sense out of it). The best scene is the opening credits, which feature speeded up cars driving down the highway and a giant moon. With Jennifer Jostyn (MILO, HOUSE OF 1000 CORPSES) and Ken Abraham (CREEPOZOIDS, BLOODY MOVIE).

Good review of this obscure (and dreadful) film. Agreed that the best part is the first 5 minutes; it actually fools the viewer into thinking it may have some production values and be worthwhile...but it quickly degenerates into groan-inducing comedy and rubber-mask horrors. Seems to be some discrepancy about whether this film contains full-frontal nudity or not--the version I saw had none (aside from a brief rear-end shot)?

Yes, this thing is pretty useless and fails to deliver on any front (some blood and T&A would have somewhat improved it - but no such luck).

I remember the "censored" version used to be in regular rotation on USA Up All Night. Now that I have seen the VHS version I can confirm there wasn't much needing to be trimmed out (there were no breasts let alone full-frontal even in the "uncut" version).

Haha you guys are spot on! But it was a fun way to spend the summer of 1987!
Regards, Todd Kauffmann (former really bad actor!)

Hey, we all have a few skeletons in our closet.

Great review. Any chance you have an original VHS copy you would consider selling? I've been trying to find one for ages.

I've been trying for ages to track down an original VHS copy of this. Any chance anyone has a copy they would consider selling?

Please email me at benruffett@hotmail.com if you do!

I've been trying to find an original VHS copy of this movie for ages. If anyone has one that they would consider selling, please email me at