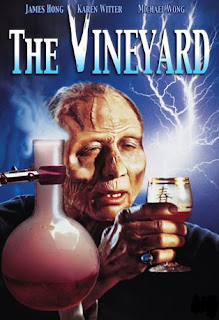 Directed by:
James Hong
William Rice
As of this writing, Chinese-American character actor James Hong has appeared in over 350 (!) films and TV shows, beginning in the mid 1950s. Throughout his career, he was often used in small or stereotypical supporting roles (which he has commented negatively upon in the press a time or two), but he eventually got around to co-directing, writing, producing and starring in his very own horror film, and here it is. He's Dr. Elson Po, a wealthy vineyard owner who produces the finest wines this side of Italy. His sinister business is actually a front for his youth-preserving wine, which he needs to survive, along with a special amulet he stole from his mother (Vivian Lee) many years earlier. Without either, he reverts back to being a very old man. Also around are a garden full of killer zombies, lingerie-clad women chained up in the dungeon, martial arts fighting henchman, snakes and tarantulas.
.
Dr. Po's friend Paul Edmonds (Karl-Heinz Teuber) poses as a film producer to lure a group of young actors and actresses to his island mansion with the prospect of film roles. Instead, they're all killed off one by one in a variety of different ways (human corpses are the main ingredient in his wine). For some reason (*cough* Hong co-wrote it *cough*) gorgeous Playboy centerfold Karen Witter wants his body. People are stabbed, decapitated and castrated, and when magic spells are cast a girl pukes up spiders and acupuncture pins pop out of a guy's neck. Some of the characters are extremely annoying (especially the himbo surfer dude), much of the acting is bad and the story is overloaded and all kinds of silly, but I'll give it a little credit for at least trying to be different. The production values are sufficient and there's probably enough action, gore and nudity to entertain most B-movie fans.
.
The cast also includes Michael Wong as our nerdy hero, Lars Wanberg, Cheryl Lawson (who also starred in THE DEAD PIT), Sean P. Donahue and lots of stunt men and women in smaller roles.
★★
Posted by The Bloody Pit of Horror at 9:08 PM

I have to check this one out sometime! Great review!