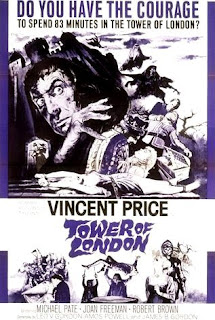 Directed by:
Roger Corman
Remake of the 1939 Universal film of the same name (which is superior in just about every possible way), this also covers the treacherous period of corruption, greed, torture and murder circa 1483 in England at the Tower of London, "A monument to the corruption to the soul!" Vincent Price (who had appeared in the original version as the Duke of Clarence) is the hunchbacked Richard III, the self-serving, sadistic son of King Edward IV, who shows up at his father's deathbed to kill, kill and kill some more to ensure his place on the throne. He literally backstabs his brother, strangles his wife, plots to discredit (then suffocates) two young princes, uses a torture chamber in the basement to stretch a woman out on the rack and threatens a man with a rat on his face while being visited by the ghosts of his victims and descending further into madness. Price does a convincing job with the nasty characterization (if you don't mind the part played in a highly theatrical manner) and while the supporting cast isn't as good as the original version, most do a fairly good job. Sets and costumes are acceptable, but this production is otherwise dull, a little too talky and the low-budget shows in a battlefield sequence obviously lifted from another film.

So sadly, while watchable, this doesn't come anywhere close to either the original or any of the high-quality Poe adaptations Corman and company were cranking out at around the same time. One of the screenwriters was Leo V. Gordon (who also gets a story credit). Francis Ford Coppola (who would direct DEMENTIA 13 next) was the dialogue director. The cast includes Joan Freeman (who'd later become one of Jason's victims in FRIDAY THE 13TH: THE FINAL CHAPTER) as the female lead, Michael Pate as Sir Ratcliffe, Bruce Gordon as the Earl of Buckingham, Richard Hale, Sandra Knight, Charles Macaulay (who played Count Dracula in BLACULA) and an uncredited Morris Ankrum as the archbishop.
★★
Posted by The Bloody Pit of Horror at 11:43 PM