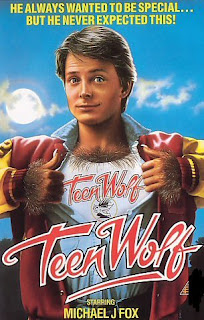 Michael J. Fox (just then starting to get huge because of the Family Ties TV series) stars as Scott, a teenager who learns that he is among a long line of werewolves. His dad (James Hampton) is also one but has managed to conceal it all these years. It takes a while for Scott to become used to the wolf tendencies, but he eventually uses them to both snag attractive girls and help his high school during their annual basketball championship. A surprise box-office hit, this corny, stupid and completely predictable teen comedy opened the floodgates for dozens of similar films mixing horror elements, brain-dead teen comedy and a "feel good" message that saturated the market in the mid/late 80s. And that's something difficult to forgive. Not only was it popular enough to have scores of immitations, it also spawned an animated TV series and an even-worse sequel starring fellow TV star Jason Bateman. Showtime later reworked the same idea for a kids movie called BIG AND HAIRY. Alright, stop snickering.
.
The cast includes Mark Holton as typical overweight comic relief named (ugh) Chubby, Lorie Griffin (CHEERLEADER CAMP), Doug Savant (who'd go on to star on the TV shows Melrose Place and Desperate Housewives), Scott Paulin, Elizabeth Gorcey (ICED), Troy Evans as a basketball coach, Richard Domeier (EVIL DEAD II), Jim McKrell and Playboy Playmate Lynda Wiesmeier.
.
Pointless trivia bit: Pay special attention to a scene in the high school gym where a hired extra actually briefly flashes his manhood before the camera.
Score: 3 out of 10
Posted by The Bloody Pit of Horror at 11:34 PM