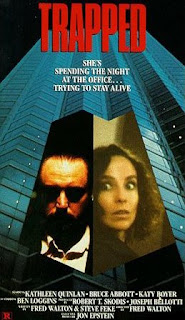 Directed by:
Fred Walton
Solid, made-for-cable thriller features Kathleen Quinlan as a businesswomen who becomes trapped in her closed and locked down for the night high rise with a psychotic maniac. A new computer security system adds to her problems, making it nearly impossible to escape the building. Despite the obvious premise and lack of plot complication, Quinlan is very good and director Walton's execution is tense and suspenseful, he makes excellent use of the location and manages several great edge-of-your-seat moments, elevating this above most other similar films. Also with Bruce Abbott (RE-ANIMATOR), Katy Boyer and Ben Loggins. MCA/Universal released it on VHS, but there's no DVD as of this writing. Should be, though.
★★★
Posted by The Bloody Pit of Horror at 11:45 PM

the deja-vu is set to continue well into this year; must've seen this when it was new. TRAPPED is a couple of set-pieces away from being something _really_ special. it could have had an OK theatrical run as is, i think. looks like fred walton finished out his career stuck in TV. his '88 remake of I SAW WHAT YOU DID isn't much, except it has shawnee smith and a coupla carradines.

This is another I need to re-watch sometime. Ditto for I Saw What You Did.