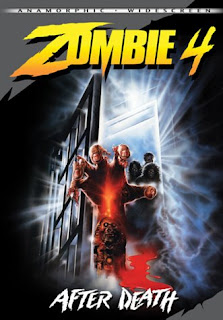 ...aka: After death - L'isola maledetta
...aka: Zombi 4
...aka: Zombie 4
...aka: Zombie 4: After Death
...aka: Zombie Flesh Eaters 3
Directed by:
Claudio Fragasso
On a tropical island, a team of scientists trying to come up with a cure for cancer make the mistake of first treating a voodoo priest's young daughter. The girl dies and her scorned father decides to use "The Book of the Dead" to bring forth a horde of zombies, starting with his own wife. Out of that mess, only a little girl named Jenny - who has been given a special amulet by her mother before she's killed - manages to escape with her life. Twenty years later, the now abandoned isle is visited by two groups of people. The first consist of three backpackers - hunky Chuck (Chuck Peyton, the real name of gay porn star Jeff Stryker), David ("Alex McBride"/ Massimo Vanni) and Valerie (who prefers not to receive credit, thank you very much) - checking to see if there's any validity to the zombie island legend. The second consists of a four army pals (Jim Gaines, Nick Nicholson, Don Wilson and Jim Moss), one of their girlfriends (Adrianne Joseph) and a now-grown Jenny (Candice Daly), who are there because some kind of mystical force draws their boat to the island. The occasional zombie is still lurking about, but even more will be crawling out of their graves once one of these nimrods decides to read a passage from "The Book of the Dead;" the title of which is hilariously written on the front of the book with a sharpie!
.
Just like the previous film in this bogus retitled "series," this is horribly dubbed, full of terrible dialogue, overuse of a fog machine, brainless action and hokey gore effects, and it can't seem to make up its mind about what kind of zombies it wants to present to us. Call me a traditionalist if you want, but I've always preferred the slower-moving variety of living dead, even though I can deal with fast-movers if that's how they're consistently presented. What I can't deal with is a film that tries to have it both ways. Some of the zombies here slowly shuffle along like they do in Romero or Fulci movies, but others run, jump and suddenly leap offscreen like they're ninja assassins. The look of the zombies also differ; some are dressed like average people but others are clad in robes and headscarves. So I guess what we have here is an Italian production with badly dubbed American lead actors running around the Filino jungle fighting off Middle Eastern flavored zombies. Sounds better than it actually is, folks.
.
Director Fragasso (billed as "Clyde Anderson" here) is best known for TROLL 2, which to many is the holy grail of terrible horror. Unfortunately, all the machine gun firing, fighting and blood being flung around gets tedious in no time and this doesn't have much of that bad movie lunacy we'd later encounter in Nilbog.
.
The 2002 DVD release from Shriek Show features interviews with Stryker, Daly (whose drug-related death in 2004 is apparently still under investigation) and Fragasso.
★1/2
Posted by The Bloody Pit of Horror at 8:29 PM