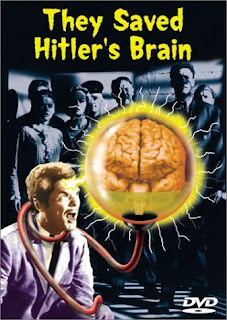 ...aka: Amazing M. H, The
...aka: Madman of Mandoras, The
...aka: Return of Mr. H, The
Directed by:
David Bradley
Jerry Warren look out! This scrambled mishmash has footage from some barely released 1950s source (titled MADMEN OF MANDORAS), with new footage from Bradley, a car crash scene stolen from the Robert Mitchum vehicle THUNDER ROAD (1958) and was shot at several different times in several different countries by different directors, cast and crew! Some of it was even photographed by Oscar-nominated cinematographer Stanley Cortez. You can tell because the production values in some scenes drastically drop right before your eyes! The plot, as is, involves a young woman who tracks down some missing relatives to the tropical Caribbean isle of Mandoras. She and her hubby soon discover that Neo-Nazis are regrouping and plotting to take over... by listening to the orders of Hitler, whose preserved head is still alive and giving orders! You've been warned.
Score: 2 out of 10
Posted by The Bloody Pit of Horror at 11:40 PM