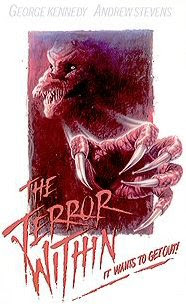 Producer Roger Corman brings us yet another futuristic ALIEN-inspired film with a little HUMANOIDS FROM THE DEEP thrown in for good measure, this time set on post-holocaust Earth. Some of our planet's last survivors (led by Andrew Stevens) have holed up in an underground scientific lab and are running out of supplies, so they investigate the surface and encounter "gargoyle things" (man-in-a-suit monsters designed by Dean Jones). A surviving girl is found and brought back to the lab, where scientists discover she's pregnant. During an attempted abortion, a small mutant monster bursts from the girls stomach, runs off, becomes full-grown, then returns later as a big, white creature with big claws and sharp fangs, to kill everyone off. Steam, guns and knives barely seem to phase it, but a dog whistle can slow it down (!) Toward the end, guest star George Kennedy gets to say "Die you miserable, ugly fuck!" Naturally this thing is full of cliches, but it's passable; decent sets, effects and acting (female leads are played by solidly by DANCE OF THE DAMNED's Starr Andreeff and THE NEST's Terri Treas). John Lafayette and Tommy Hinkley co-star. Stevens would return to directed, write and star in the direct-to-video sequel, THE TERROR WITHIN II, again for Corman.