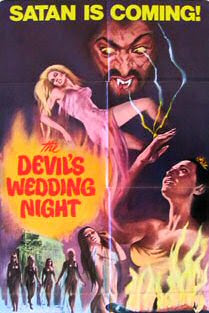 ...aka: Devil's Wedding Night, The

...aka: Full Moon of the Virgins


There's really not much to gain from seeking out this boring, nudity-filled remake of Hammer's COUNTESS DRACULA. Sometime in the 1800s, twin brothers Karl and Franz Schiller (both of whom are played by Mark Damon) discuss vampires and the legendary ruby red "Ring of Niebelonion." Legend has it the ring had passed down supernatural abilities to such historical figures as Alexander the Great, Genghis Khan, Attila the Hun and Ivan the Terrible. Anyway, Franz the bad boy (who wears heavy eyeliner, has slicked back hair, gambling debts and quotes Edgar Allan Poe) decides to take his horse down the road to visit Castle Dracula and complete his "architectural studies." First he stops by an inn to ignore the locals' warnings and seduce the innkeeper's daughter Tania (Francesca Romana Davila). Once in the castle, he meets a zombie-like maid named Lara (Esmeralda Barros) and then the owner of the castle, seductive Countess Dracula (Rosalba Neri as "Sara Bay). Even though he finds the behavior of both ladies a little strange and off-putting (hell, he even catches Lara lounging in a casket at one point!), that doesn't distract him from the feminine wiles of Mrs. Dracula, as he's easily seduced, vampirized and stuck in a coffin.

When bookish Karl shows up later looking for his missing bro, he's encouraged to spend the night, his wine is drugged and he trips out to creepy sculptures, laughing, a soft-focus lesbian scene and (the best bit) Neri being coated with blood and emerging naked from a fog-enshrouded crypt. He also figures out that the Countess is in possession of the ring and plans on using its powers to lure five virginal village girls to her castle to sacrifice; bathing in their blood helping her maintain her beauty and youth. She also wants Satan to possess the body of Franz or something to that effect (it's all a little muddled). There's a a fairly well done ritual ceremony at the end where five naked girls are prepared to be sacrificed by hooded cultists, but otherwise it's just a very slow trip where the rewards are few and far between.

Neri (LADY FRANKENSTEIN) looks great as the Countess, especially in the black wedding gown, but this film isn't a very good showcase for her talents (which, unlike many starlets of the era, extended much further than her nude scenes). Barros (the Brazilian-born star of 1968's KING OF KONG ISLAND) is also pretty good as Lady Dracula's stern lesbian handmaiden. "Ciro"/Xiro Papas has a small, but fun, role as a big bald unibrow-sporting vampire who shows up near the end. Damon, is tolerable, but a bit on the dull side as he usually is. There's only a minimal amount of atmosphere thanks to cheap-looking set design and Joe D'Amato's flat-looking photography. It's based on the story "The Brides of Countess Dracula" by Ian Danby and Ralph Zucker.
.
The DVD from Shout! Factory is a bad print of the film with lots of damage and bad jumps in both picture and sound. There's an optional version taken from Elvira's "Movie Macabre" show, where she interrupts the film from time to time to make her trademark cheesy wisecracks.