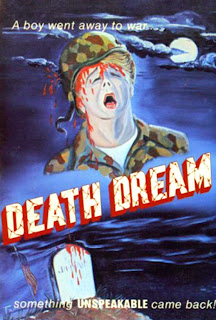 
Upon hearing the tragic news that her beloved son Andy has just been killed while serving in the Vietnam War, grieving mother Christine (Lynn Carlin) wishes for his safe return, anyway. As the old adage says "You better be careful what you wish for" just as one obscenely popular writer who shall remain nameless once intoned, "Sometimes dead is better." In this particular case, dead is definitely better. Andy (Richard Backus) does indeed return home, but the family's joy is short-lived upon the slow realization that their once kind, outgoing and upstanding young son has transformed into another beast entirely. Sure he may look the same (well... sometimes), but he's suddenly quiet, withdrawn, emotionless... and downright creepy. Andy spends his days and nights sitting in his room slowly rocking back and forth in a rocking chair and has a devilish grimace plastered on his face for no good reason. Andy's father Charles (John Marley), who has something of a drinking problem, gets fed up and frustrated in no short time, but Christine demands patience from the entire family. After all, who knows what kind of terrible things he witnessed in the war. Christine thinks with a little time and  understanding that Andy will eventually snap out of it. Little does she or anyone else realize, but Andy has somehow turned into a remorseless vampire-like fiend who needs fresh human blood to sustain himself. Without it, he rapidly starts to age and will die.


Though never really blatantly discussed, the anti-war sentiment rings loud and clear in this clever little film, which uses post traumatic stress as a metaphoric means to fuel its horror. After all, many soldiers who serve and are exposed to the misery, inhumanity and death of war clearly don't return home the same person. Just in Andy's case, he doesn't really return as the same species. No explanation is ever even given for Andy's return, what Andy has become or how Andy became that way, and none is really necessary. The film doesn't shy away from including the entire family in on the suffering either, as families are often left with the task of healing their physically and / or psychologically crippled children / siblings who return from overseas having seen too much. Even supporting characters - such as Andy's sister Cathy (Anya Ormsby), who is clearly not favored by the mother despite being a sweet girl - and Andy's former girlfriend Joanne (Jane Daly), who is still in love with him after all his time away, drive home the point that the atrocities of war affect many, many lives on the home front. This material certainly could have been taken a step or two further than what it actually is, but nonetheless it gets the job done as both a horror film and an indictment on the horrific fallout of war.


Originally titled Dead of Night and also known as The Night Andy Came Home and by several other titles, Deathdream may not have enough action for some tastes and, despite boasting early makeup effects from Tom Savini (who was assisted by screenwriter Alan Ormsby), the film is fairly restrained when it comes to gore. There are certainly a few bloody sequences though, including Andy stabbing a psychiatrist (Henderson Forsythe) to death with a syringe and feasting on his blood. The design of the more monstrous Andy is highly effective and there are several genuinely disturbing moments, including a scene where Andy strangles the family dog to death in front of a bunch of neighborhood children. The performances are mostly solid, with particularly impressive contributions from Carlin and, most especially, Backus in a very difficult-to-play part. It was filmed in 1972 but not released until two years later.


This same team of filmmakers (director Clark, writer Ormsby) plus several of the actresses, had previously teamed up for the bizarre zombie film CHILDREN SHOULDN'T PLAY WITH DEAD THINGS (1972). Ormsby and Jeff Gillen (who appears here as a bartender) would make the terrific DERANGED (1973), based on real life killer and necrophile Ed Gein, the following year. Clark graduated to the much-loved trend-setting proto slasher BLACK CHRISTMAS (1974). Every single one of these films is worthwhile.