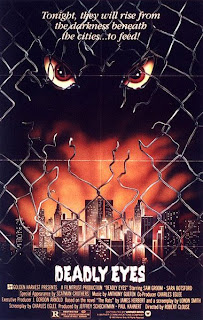 ...aka: Night Eyes
...aka: Rats, The
Directed by:
Robert Clouse
A toxic waste leak in the Toronto subway system results in giant, ravenous rodents that pop up just in time for the opening of the Mayor’s new subway extension. Falling into the mix are a high school teacher (Sam Groom) who falls for a public health inspector (Sara Botsford) while fending off the advances of a blonde student (Lisa Langlois), plus corrupt city officials who get what they deserve. There’s an amusing attack scene in a movie theater showing Bruce Lee movies (the director is best known for the martial arts classic ENTER THE DRAGON), a child is killed and the effects seemed to have been achieved by sticking small dogs in rat suits. It's based on the novel "The Rats" by James Herbert and also features Scatman Crothers, Cec Linder, Lesleh Donaldson, James B. Douglas and Michael McManus as the mayor. A co-production between Canada's one-shot Filmthrust Productions and Hong Kong's prolific Golden Harvest Company.
Score: 4 out of 10
Posted by The Bloody Pit of Horror at 1:32 PM