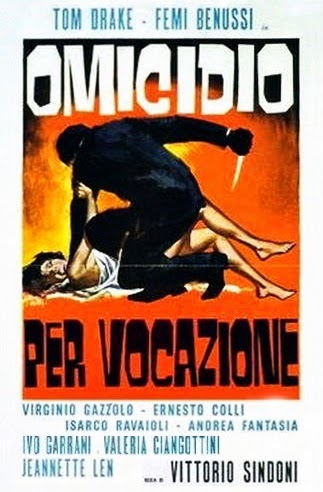 ... aka: Murder by Vocation
... aka: Omicidio per vocazione
... aka: Tödliches Erbe (Deadly Heritage)


Deaf widower Oscar Marot (Arnaldo De Angelis) is run over by a train, leaving behind three pretty daughters; loner Simone (Femi Benussi), married Rosalie ("Jeanette Len" / Giovanna Lenzi) and naive Colette (Valeria Ciangottini), as well as an adopted invalid / semi-retarded son Janot (Ernesto Colli), who he seemed even more fond of than his own girls. Afterward, a will reader shows up and reveals that even though Oscar worked at a train station, he was something of a closet financial wiz who invested wisely enough to save back a million franks. However, a stipulation in his will is that the family has to wait three long years until Janot reaches his 21st birthday to collect their inheritance. Guess what happens next? You got it... people start mysteriously dying. First up is Janot, who gets splattered into about a dozen pieces after someone pushes him front of a moving train. Many others will follow.

There are a lot of characters and they all pretty much have a motive to murder. Simone's married lover Jules Didier (Isarco Ravaioli) owns a popular dance club, but doesn't make enough to pay off his wife Natalie (Alessandra Moravia), who is demanding he give her 50,000 franks or else she won't give him a divorce. Rosalie's pushy, much-hated metal worker husband Leon (Ivo Garrani) is drowning in debt and urgently needs to pay off some debtors or else he'll lose everything. Throw in investigating police Commissioner Etienne (Virgilio Gazzolo) and Chief Inspector Gerard (Tom Drake) and you have a standard, though sturdy enough, foundation for an enjoyable giallo. Though much less stylish than the films brought to us by the likes of Argento, Bava or Martino, I have to give this one some extra credit for a decent screenplay, which will adequately throw most viewers off track with lots of twists and turns, especially toward the end. I also give it credit for sensibly tying up all the loose ends by the finale. Overall it's probably one of the better-plotted films in this genre.

Various interior and exterior locations are fairly well used here with several nice pan shots of a picturesque old city and some brief scenes taking place in a crumbling old building, around a lake with tall weeds and a field of dead corn stalks. Since this is one of the first of its kind, don't expect a whole lot of gore or nudity. Most of the murders are committed off-screen (including one committed with a golf club) so there's just a little bit of blood and Benussi has only brief partial nude scene taking a shower. The acting and direction are fairly good, as are the score by Stefano Torossi and cinematography by Ascenzio Rossi.

The ZDD Visual Media disc is a sharp and good-looking print of this film, but the English-dubbing is quite bad at times (particular the person who did the Janot character). Also the actor cast as Janot role looks at least ten years too old to be playing an 18-year-old. Minor gripes, I know. Fans of giallo or mysteries with more of an emphasis on story over exploitation should still enjoy this one quite a bit.