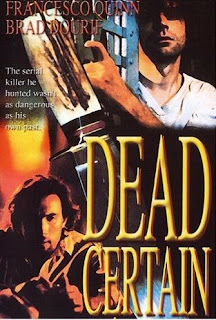 Directed by:
Anders Palm
Francisco Quinn (son of Anthony) is completely uninteresting as a detective who seeks help from incarcerated serial killer Brad Dourif to get his hands on another psycho nutjob who’s running around killing prostitutes. When released to video (in 1992), this got labeled as a SILENCE OF THE LAMB rip-off, but it was actually made first. Too bad the script is dull, the acting uneven and the screen-writer makes the mistake of giving us a "hero" who’s an unsympathetic, heavy-drinking creep with a four-letter vocabulary who screws hookers and takes his young son to a strip club in the middle of a custody battle with his ex-wife (Karen Russell). A grating music score by Charlie Mole and bland supporting cast don't help matters. Filmed as MURDER BLUES in Toronto, Canada.
★1/2
Posted by The Bloody Pit of Horror at 1:24 PM