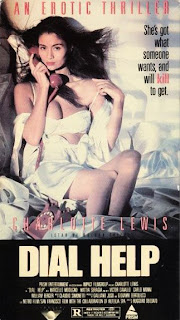 ...aka: Dial: Help
...aka: Love Threat
...aka: Ragno gelido
Directed by:
Ruggero Deodato
An "erotic thriller," or so says the video box, about a beautiful fashion model (Charlotte Lewis) in Rome who has the misfortune of dialing the wrong telephone number one day when she's trying to get ahold of her long-distance lover. Soon after, she's threatened by mysterious calls, then some kind of malevolent spirit starts using phones and phone cords to attack her and her friends. The storyline makes absolutely no sense, it's stupid, it's tame, the murders are unintentionally hilarious (such as a payphone firing coins at someone) and there's even a ridiculous theme song ("Baby, Don't Answer the Telephone"), but the movie at least looks decent thanks to cinematographer Renato Tafuri, has a good Claudio Simonetti score and seems to have been filmed in English, though the best special effect is undoubtedly the stunning Lewis lounging around in her lingerie or in a bathtub. With Marcello Modugno (DEMONS), Carola Stagnaro (TENEBRE) and William Berger as a paranormal expert.
Score: 3 out of 10
Posted by The Bloody Pit of Horror at 3:00 PM