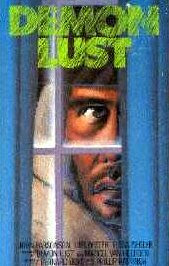 Directed by:
Bernard Buys
A woman who was sexually molester as a child, and her husband, are harassed by a couple of backwoods psychos. Originally released as SAVAGE ENCOUNTER at 86 minutes, the U.S. video release from Genesis (released in 1988 under the title DEMON LUST) is missing ten minutes. Review coming soon.
★
Posted by The Bloody Pit of Horror at 6:04 PM