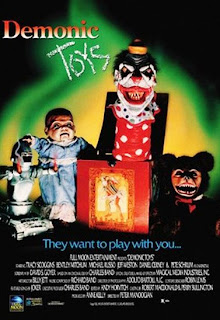 
Irritating, childish and brainless just about sum up this Full Moon release, which was filmed in 1990 but not released until 1992. Attractive Tracy Scoggins stars as a pregnant undercover policewoman who, along with the thugs (Barry Lynch and Michael Russo) who just killed her partner/ lover (Jeff Weston), a fast-food delivery guy (Bentley Mitchum, Gregory's son), a homeless girl (Ellen Weston) and a security guard, becomes trapped in a closed-down toy warehouse. Since the warehouse was built on top of a burial mound where a demon was emtombed, and one of the characters is injured, a splash of blood is all it takes to awaken a demon kid (Daniel Cerny), who wants to possess Scoggins' unborn child and also brings an assortment of toys to murderous life to kill off the rest of the cast. There's a killer jack-in-the-box, teddy bear, robot and a foul-mouthed demon baby doll ("Baby Oopsie Daisy") that spouts some of the lamest wise cracks you'll ever hear. The special effects are OK, and I guess this'll do the trick if you're in the mood for a stupid, cheesy killer toy/doll flick full of infantile humor.
.
Scoggins (and the horny baby doll) returned in DOLLMAN VS. DEMONIC TOYS (1993), a direct-to-video "sequel," and there was also PUPPET MASTER VS. DEMONIC TOYS (2004), which was filmed in Bulgaria. The fourth installment (DEMONIC TOYS: PERSONAL DEMONS), which was filmed in Italy, is slated for release sometime this year. All four were produced by Charles Band.