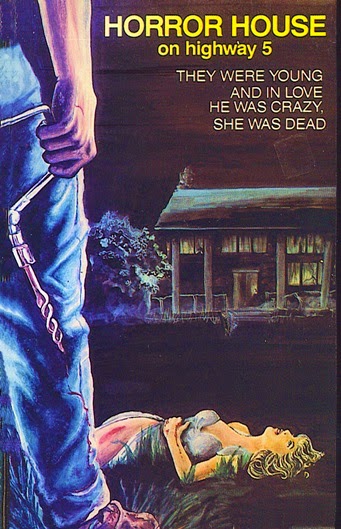 ... aka: Horror House on Highway Five


A guy in a Richard Nixon mask (played by "Ronald Reagan") is prowling around and killing people. He strangles a guy in a car then kills his girlfriend after a shower scene. Meanwhile, a comic relief Dr. Marbuse (Phil Therrien) sends out his retarded henchman Gary (Max Manthey) to lure women back to his house, so they can be drugged for some kind of ceremony. It never really explains what kind of ceremony. A teacher with a major lisp sends out three students; Sally (Irene F.), Louise (Gina Christiansen) and Mike aka "The Pothead" (Michael Castagnolia) to a secluded spot to make some kind of rocket. A guy named Joe (Richard Meltzer) runs over the Nixon killer and his girlfriend says, "What's wrong with you? You just ran that guy over! You must have a low I.Q.!" Then the students wander into the "Horror House" and get killed off. The Nixon guy lives in the red-lit basement and the doctor and Gary live upstairs and some kind of ghost or something flies through the air, makes a whip-cracking sound and scratches people. It never explains what connection these people have or what they are attempting to accomplish. I'm not even convinced the filmmakers themselves knew what was going on.

The acting is terrible; people who find dead bodies lying around, get hurt or get chased by a psycho waving a chainsaw, show about the exact same emotions they do while walking down the street. The dialogue, lighting, editing and production values are equally bad. The tone is uncertain, it wavers from wanting to be serious horror to wanting to be a goofy, campy, intentionally stupid comedy and doesn't do well at either. Still, this is the exact kind of strange homemade horror film that's going to amuse certain people out there. It was filmed on the cheap around Hollywood. 1988's Hellbent (a spoof about a musician selling his soul to the devil) was next up for the director.