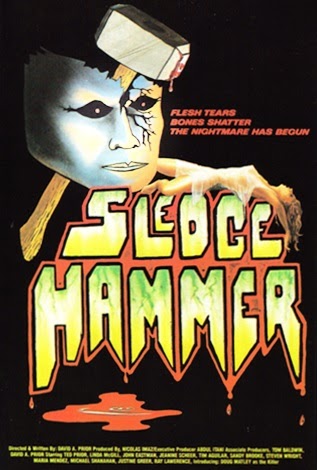 
Directed by:
David A. Prior


An adulterous woman locks her 8-year-old son in the closet, so he kills her and her lover with a sledge hammer. The killer kid disappears and the crimes go unsolved. Ten years later, seven vacationers (who look a little older than the "teens" usually found in films like this) decide to rent the same secluded red country home the original murders occurred in. After unloading the van (which is promptly taken to get some repairs done to ensure no on can escape when they need to), having a food fight, playing charades and dancing around while guzzling down beer and wine almost nonstop, the group decide to hold a seance to see if they can find out the identity of the killer. Soon enough, they find history repeating itself as a tall, ghostly assailant in a clear plastic mask starts haunting the halls, brandishing his patented sledge hammer. The fact this was shot-with-a-camcorder, has amateurish acting, thoroughly uninteresting dialogue and characters and very minimalistic sets (white walls, rooms with little to no furniture...) often makes this cheap-o obscure slasher resemble a porno film. There's very little gore aside from a head being bashed in and someone getting stabbed through the neck, unimaginative kills and one mild, awkward sex scene. Unfortunately, there are also far too many long, drawn-out scenes that seem to go on for an eternity, such as a two-minute shot of a closet door and a two-minute slow-motion shot of two people walking through a field while a cheesy, fluttery instrumental plays. The first sequence is also repeated, nearly in its entirety, when one of the characters recounts the history of the place.

For the medium, it is fairly well filmed. The sound quality isn't bad either for one of these videos, and you can tell it was recorded separately because the boom mic (or boom mic shadow) is visible numerous times throughout. Hey, at least they didn't use the built-in mic on the camera. Discounting about 10 minutes of opening and closing credits, this one barely runs over 70, and if you removed all the repeat footage, overlong shots and overused slow-motion shots, it wouldn't even run an hour.

Still, like other similar flicks from this era, there's something almost pleasant and nostalgic about the feel of this one (the non-existent production values, the synthesizer score, the thoroughly unprofessional yet enthusiastic cast), which will appeal to some people out there. The fact that it's also pretty hard to track down these days also ensures some people, particularly slasher flick enthusiasts, will want to see it. The budget is said to be just 40,000 dollars, which is actually a little higher than many of today's digital horror flicks. It was the first of dozens of direct-to-video efforts from director David A. Prior (who mostly did action films), and is probably also his cheapest. That's his muscle-bound brother, actor Ted Prior (who appeared in most of David's films), in the lead role. Sandy Brooke (Terror on Alcatraz, Deep Space, etc.) is the only other cast member I recognize.