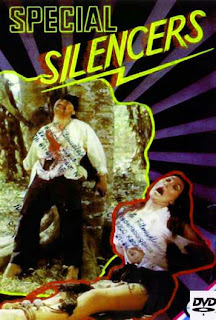 Directed by:
Aziral
Power-mad Gundar (Dicky Zulkarnaen) karate chops his monk grandfather and steals his "special silencers;" little orange pills which have different effects depending on who takes them. Somehow they help monks with their meditation, but they can also make the person who possesses them invincible to weapons and sharp objects. And if they're slipped into some unsuspecting person's food or drink, there's another complication - a rapidly-growing tree begins sprouting in their stomach, ripping them apart! Gundar conspires with his right-hand man Gumilar (W.D. Mochtar) and their large army of thugs to use the pills and other means to overthrow the mayor of the village. After successfully slipping the mayor some silencers, resulting in his death, the two baddies then realize they must also knock off his possible successors, relatives and anyone else who might get in their way of taking over the village, including the mayor's assistant, brother (a cop), nephew and daughter. Riding into town on his motorcycle right as things are getting nasty is Hendar (Barry Prima), who was a classmate of the mayor's nephew Dayan, and also takes a liking to his daughter, Julia (Eva Arnaz). He teams up with the two of them to put a stop to Gundar and his cronies, and the rest is basically wall-to-wall action. Our heroes barely have time to take a breath before they're jumping into their next fight scene.

Thankfully, the action scenes are well-done, elaborately staged and fun to watch, featuring lots of high kicks, punches, flips, various martial arts moves (Prima himself has a background in tae kwan do) and spears, logs, pipes, nets, swords and other props brought in for a little variety. One of my favorite scenes was Prima fighting off the bad guys while on top of and underneath a moving truck! Not only is there plenty of action and plenty of amusing moments, but there is also a welcome helping of the red stuff. The scenes featuring the pills at work, with tree branches popping out of stomach's and mouths, are really bloody, and the special effects themselves are surprisingly good. The good guys (and girl) are likable enough to get you in their corner, while the bad guys are adequately scummy, complete with their own torture chamber where they get to terrorize victims with rats and snakes! There's also a very catchy synthesizer score from Gatot Sudarto.

I think people into martial arts flicks and Asian horror of the period (this one's from Indonesia) will get a real kick out of it. Unfortunately it's a very difficult film to find. The version I saw was released by a company called Delta Video out of the Netherlands, who made sure that their company logo popped up on screen at least five times during the film. It was English-dubbed and with Dutch subtitles, but the nudity in a scene where a virgin is raped is fogged out. The dubbing isn't bad at all and was done by people who obviously knew what kind of film they were doing voice-overs for. There's no official DVD release, but hopefully that will change. It seems like something Mondo Macabro might be interested in releasing. In the meantime, if you can find it anywhere via a torrent site or what not, I definitely recommend giving it a try. It's fun!
★★1/2
Posted by The Bloody Pit of Horror at 1:40 AM