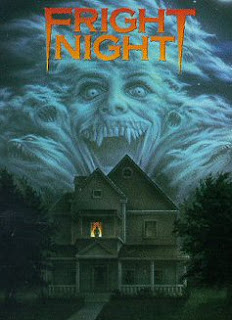 Directed by:
Tom Holland
FRIGHT NIGHT will always hold a little place in my heart because it was one of the very first horror films I ever saw as a kid. I grew up on a little farm in the country and while we did have a small television set, we only had the "free" channels until I was well into my teen years. No cable. No VCR. This is a good ten+ years before the internet became commonplace and people were still making three trips to the video store per week. And my family didn't even do that because we didn't have a VCR until the early '90s! My siblings and I were even very limited in what we could watch on the four basic channels we did have. Yes, I had those kind of parents. You know, the kind who want their children to read books and play outside instead of plopping them down in front of the TV, handing them a remote and then leaving the room. One of the first horrific things I recall seeing was on the sci-fi show V. I should have known right then and there I'd become a horror nut when I (unbeknownst to my parents) stayed up past my bedtime, snuck into the hallway and peaked around the corner because I just had to see the evil alien lady eat a live taranula.
.
A couple of years after that I stayed the night at a friend's house and they had a channel called HBO. This is back when, in between movies, they showed the HBO logo flying through space and played that regal-sounding music. That's when I got a glimpse of my very first horror film - FRIGHT NIGHT - which had gory, mind-blowing special effects and a level of sensuality my little mind could barely comprehend at the time. For the next few years I tried to spend the night as much as possible. Later on, I became friends with a kid who owned his own VCR and had parents who didn't care if we stayed up all night watching horror films. The video store clerks didn't seem to care either when a couple of ten year olds brought movies like FACES OF DEATH, SNUFF and MAKE THEM DIE SLOWLY up to the counter. Oh yeah, where was I again? Oh yeah... FRIGHT NIGHT...
.
Charley Brewster (William Ragsdale), your typical American teenager, cries vampire after witnessing, REAR WINDOW-style, his handsome and mysterious new neighbor Jerry Dandridge (Chris Sarandon) sinking his fangs into a sexy prostitute. Naturally no one believes him, so he enlists the aid of a few friends (would-be girlfriend Amanda Bearse and weird-o pal Stephen Geoffreys), as well as TV horror host Peter Vincent (Roddy McDowall), who'd played a courageous vampire slayer in a series of films but is reluctant to do so in real life, to help him out. The movie has a sense of humor, plenty of creepy/scary moments, a good soundtrack, wonderful special effects from Robert Erdlund and top notch technical credits across the board. But what really makes this film stand out from the pack are a trio of wonderful performances; a seductive, menacing turn by Sarandon as the vampire, a marvelously funny and touching performance from McDowall as the has-been and a bizarre showing by Geoffreys as Charley's offbeat best pal "Evil Ed." Like the second entry in the Elm Street franchise, much has been made of the gay subtext in this one, from Charley's infatuation with Dandridge, to the fact the vampire lives with a male companion.
.
Winner of three Saturn awards, for Best Supporting Actor (McDowall), Best Screenplay (Holland) and Best Horror Film and followed by a 1988 sequel. Holland would return with another big horror hit - CHILD'S PLAY - in a few years and then spend the 90s making subpar films suchs as the silly psycho-secretary movie THE TEMP (1993) and the awful made-for-TV Stephen King adaptation THE LANGOLIERS (1995).
★★★
Posted by The Bloody Pit of Horror at 9:23 PM