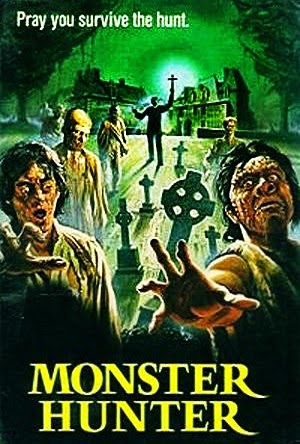 
6'6" George Eastman (real name Luigi Montefiore) is pretty imposing and intense as human monster Mikos Stenopolis, fresh from his fetus-feasting, gut-eating exploits in 1980's financially successful Neapolitan gore-fest THE GRIM REAPER (also from director D'Amato). Here, in the opening sequence, Mikos is disemboweled on a steel gate and immediately taken to a hospital for gory surgery. He recovers quickly (in a matter of hours), sticks a drill through a female doctor's head and goes after other victims so he can regenerate his always dying cells with their blood. A determined, obsessive priest who has been tracking him (Edmund Purdom, the Monster Hunter of the American title and obviously patterned after Dr. Loomis in Halloween) and a police sergeant (Charles Borromel) set out to stop him. The killer eventually ends up in a remote house to terrorize a short-haired nurse (Annie Belle, one of the party guests from House on the Edge of the Park), a bedridden teen girl (Katya Berger), her (real-life) kid brother (Kasimir Berger) who keeps talking about the Boogeyman, and a blonde babysitter (Cindy Leadbetter), who is promptly axed in the head the second she exits the front door. There are lots of grisly death scenes, such as table saw splitting a machine shop worker's head right down the middle, scissors stuck in a neck, gouged out eyeballs, a face slow-roasted in an oven and a gory decapitation. Eventually it's just the crippled girl vs. the near-unstoppable killer zombie in some well fairly well done suspense sequences. The ending is pretty memorable, too.

The print I saw from T-Z video under the moniker Zombie 6: Monster Hunter was washed-out and in awful condition. I'm actually not aware of a remastered print that is currently available in the U.S., though another shoddy print was released by Wizard Video (titled Monster Hunter) sometime in the 80s. The film is slow in spots and borrows a ton of ideas from other, more popular slashers (like the aforementioned Halloween), but is a surprisingly entertaining exploitation-horror film nonetheless and delivers what fans of these types of films want to see (aside from the curious absence of nudity). Eastman (sans make-up this time) has more screen time than he did in the original and gives an effective, creepy performance. He also wrote the story and scripted as "John Cart." Future director Michele Soavi (STAGE FRIGHT, Cemetery Man) has an uncredited cameo as a motorcyclist/victim, as do several other D'Amato regulars. The UK release title was Absurd.

I haven't had a chance to check out the quality of it yet but it has to be better than the EDDE one you seem to have watched.