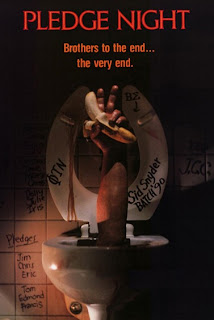 ...aka: Hazing in Hell, A
...aka: Pledge Class
Directed by:
Paul Ziller
The acid-scarred victim of a fraternity prank gone wrong returns years later as a vengeance-seeking ghost to kill off frat house boyz who live in the same house where he died. There's plenty of cheap gore being thrown around, but the demeaning look at frat house hazing takes up too much of the time (and is far from amusing), it's illogical, juvenile, filled with irritating characters, is cheap-looking and lapses into the a rather mundane killing spree after awhile. Oh yeah, and the ending is awful and embarrassing. Much of the "comedy" centers around various bodily functions, and not surprisingly (since this involves frat guys), lots of things go up asses, including a cherry bomb during the stirring (?) conclusion. Then again, I guess one shouldn't expect much from a video featuring a hand emerging from a urinal on the cover.
.
It was filmed around Rutgers University in winter of 1988 but not released until 1990. The director (who started out doing porno movies) went on to take the direct-to-video action movie route later in his career and is still directing to this day. Co-star Joey Belladonna is a member of the metal band Anthrax, who contributed songs to the film's soundtrack. The cast also includes James Davies, Shannon McMahon (from BLOOD SISTERS, another awful college-themed horror flick), Arthur Lundquist (THE REGENERATED MAN) and Cecilia Wilde (PSYCHOS IN LOVE).