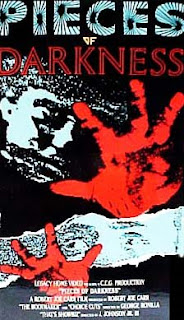 Directed by:
George Bonilla
J.J. Johnson III
Pieces of shit, more like it. You think sitting through granny's home movies is boring? This is someone's home movie... someone you don't know. It's a shot-with-a-camcorder horror anthology with linking segments that could easily be the worst of its type. We're talkin' bottom of the barrel here folks, since it's not even enjoyable in a so-bad-it's-good kind of way. The first story concerns a disturbed Vietnam vet on the brink of sanity. It includes some of the least convincing Nam footage committed to videotape (which was obviously just shot in someone's backyard), zombie soldiers and eventually a shotgun murder. Yep, that's all the pay off you get... Part 2 concerns a pair of butchers and a contrived woman-who-comes-between-two-brothers plot. Finally, there's a clichéd (and nearly incomprehensible) tale of a starving actor who sells his soul to the devil for a successful career. No, his name ain't Guy Woodhouse, but you'll wish it was. In between, there's a living dead host who makes idiotic wisecracks. All three tales are slow, talky, have awful acting, choppy editing and terrible dialogue, too-harsh lighting, plus some unbelievable continuity errors. I guess the middle segment is the best by default since at least it has a brief topless scene and a decapitated head.

The non-existent budget wouldn't bother me as much as it did if they had tried to come up with something at least half way decent, but the fact it's unimaginative, boring and technically abysmal makes it doubly hard to get through. On the plus side, this seems to have been barely released to video twenty years ago (by Legacy) so you're not likely to run across a copy anyway unless you're actively looking for it. I just saw one on ebay the other day for 60 dollars. Trust me, it ain't worth it!
NO STARS!
Posted by The Bloody Pit of Horror at 11:42 PM