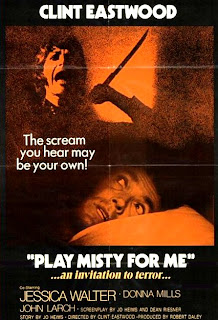 Directed by:
Clint Eastwood
Eastwood (also making his directorial debut here) is a late-night radio DJ who is seduced and then stalked by a psychotic one-night-stand (Jessica Walter). Aside from a maudlin romantic collage set to Roberta Flack’s “The First Time Ever I Saw Your Face,” this is a very good thriller and the prototype for FATAL ATTRACTION and its series of countless clones. Director Don Siegel, who directed many of Clint's best projects from this period (including THE BEGUILED), has a cameo as a bartender.
★★★
Posted by The Bloody Pit of Horror at 11:49 PM