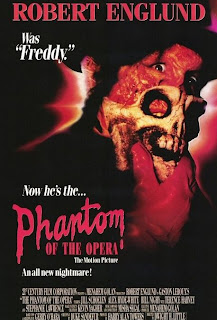 ...aka: Gaston Leroux's The Phantom of the Opera
...aka: Phantom of the Opera: The Motion Picture
Directed by:
Dwight H. Little
With Robert Englund cast as the love struck Phantom you know this isn't going to be high art, but it's an OK effort with good cinematography, decent production values, fine art direction and period detail and, of course, plenty of gory make-up effects to keep Bob's legion of Elm Street fans happy. The story is about the same as the classic Gaston Leroux adaptations as beautiful opera understudy Christine (Jill Schoelen, who's quite appealing here) is unwillingly helped out by the evil Phantom/Erik; he's out to both avenge those who have mocked him and advance her budding career. The biggest differences between this and other versions is that the title character stitches the skin of his victims onto his face, has made a pact with Satan and dispatches the supporting cast in more violent ways (including substituting a decaptiation for the famous chandelier dropping scene). Englund doesn't seem to know whether to be menacing or campy here, and in a movie like this it's hard to have it both ways. The supporting cast includes Alex Hyde-White, Bill Nighy and a pre-Saturday Night Live Molly Shannon making her film debut in the bookmarking scenes set in New York City.
.
The "sequel" to this film isn't actually a sequel. It's the 1991 film DANCE MACABRE, which was filmed in Russia by director Greydon Clark, features Englund in a dual role as a choreographer and an elderly wheelchair-bound female ballerina (!) and was re-titled PHANTOM OF THE OPERA II for some markets.
★★★
Posted by The Bloody Pit of Horror at 11:41 PM