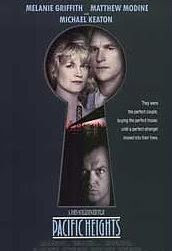 Young married couple Patty (Melanie Griffith) and Drake (Matthew Modine) buy a big Victorian style house in San Francisco and, being seriously in debt, decide to remodel the place into three apartments; one for them and two to rent. An older Asian couple (Mako and Nobu McCarthy) move into one apartment and Carter Hayes (Michael Keaton) moves into another. Carter turns out to be a psycho who hides out in the parking garage in shades and won't pay the rent. He also lets cockroaches loose in the building, starts seriously damaging the property and eventually starts to harass the couple, which leads to violence and murder. This solid and well-made suspense thriller is very entertaining, well-paced and has a credible premise, as well as credible performances from the entire cast. Keaton is particularly good. Griffith's mother, Tippi Hedren (of THE BIRDS fame) pops up in a cameo, as does the director (who can be seen riding an elevator).
.
The excellent supporting cast includes the always watchable Laurie Metcalf, Luca Bercovici (the director of GHOULIES and ROCKULA), Dan Hedaya, Beverly D'Angelo, Nicholas Pryor, Guy Boyd, Tracey Walter as a pest exterminator and Dabbs Greer.
★★★
Posted by The Bloody Pit of Horror at 11:31 PM