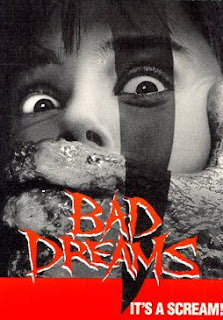 Directed by:
Andrew Fleming
Cynthia (Jennifer Rubin, having bad dreams yet again) is the only surviving member of a 70's hippie cult after everyone else took a bath in gasoline and then set themselves on fire. She awakens from a thirteen year coma only to be haunted by nightmares of demented cult guru Harris (Richard Lynch). When members of her therapy group (populated by the usual assortment of histrionic weirdos) start dying, presumably by suicide, she thinks his ghost might be responsible. But a more human monster - in the form of either a questionable doctor played by Harris Yulin or one of several unhinged patients - may actually be responsible. This one's little more than an irritating major studio production that synthetically rips off successful recent hits, particularly the NIGHTMARE ON ELM STREET franchise. In fact, there are many similarities between this one and the third installment of the series, including the ghostly villain with a charred face, a psychiatric hospital setting, victims who are written off as suicides and Ruben herself (who had played Taryn in Dream Warriors). Though derivative, often times silly and gimmicky with the murder scenes (with uneven special effects), it's equipped with decent enough production values (Gale-Anne Hurd had also produced several of James Cameron's biggest hits) and a good enough cast (Lynch and Yulin are especially good and give it their all) to keep it watchable. Not great or even particularly good, but passable for the most part.
.
It's the freshman effort from NYU-graduate Andrew Fleming (also co-scripter on the film along with Steven E. de Souza), who'd go on to find some success with the indy comedy THREESOME (1994) and the teen horror hit THE CRAFT (1995). "Sweet Child O' Mine" by Guns N' Roses is the end theme song. The supporting cast includes Bruce Abbott (RE-ANIMATOR) as a compassionate doctor, Dean Cameron and his amazing eyebrows as chief red herring Ralph, Elizabeth (E.G.) Daily and Susan Ruttan (TV's "L.A. Law") as patients, Sy Richardson as a detective and Charles Fleischer (who was also in the original Elm Street) as a pharmacist.
★★
Posted by The Bloody Pit of Horror at 10:30 PM