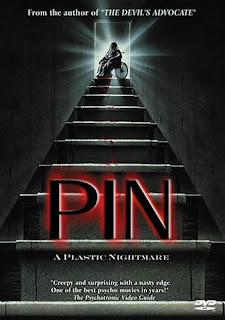 ...aka: Pin... A Plastic Nightmare
...aka: Schizo Dream
Directed by:
Sandor Stern
Seldom is this film spoken of and that's a shame. Impressively written and directed by Canadian filmmaker Sandor Stern (who is probably best known for scripting the lousy-but-successful box office smash THE AMITYVILLE HORROR), this creepy and effectively low-key psychological thriller comes as a rare and welcome surprise, especially at a time when Freddy, Michael Myers and Jason were hacking their way through theaters (and sadly, hogging most of the attention). The prosperous Linden family live in tight household headed over by a very stern doctor father (Terry O'Quinn) and an obsessive-compulsive mother (Bronwen Mantel) so extreme she keeps plastic slip-covers over all the furniture. When their sheltered children, Leon and Ursula, begin to start inquiring about the birds and bees, O'Quinn uses his ventriloquist skills to bring a medical display dummy named Pin (short for Pinocchio) to life to answer their questions. The film then jumps ahead ten or so years when the parents are killed in a car crash and Leon (David Hewlett) begins to display schizophrenic tendencies. He still believes Pin is alive, insists others treat the dummy like a real person and is eventually reduced to using Pin to murder his "enemies" to keep his sister (Cyndy Preston) in his life.
.
A film as subtle and quiet as this one requires solid, serious dramatic performances to work and Hewlett, Preston (both excellent) and O'Quinn (great as usual, but not in the film too long) don't disappoint in this thoughtful and eerie film. A real sleeper. Don't miss it! Based on a novel by Andrew Niederman (who also wrote the novel the film THE DEVIL'S ADVOCATE was based on). The cast includes John Pyper-Ferguson as Ursula's sweet new boyfriend (who Leon can't stand), Helene Udy and Patricia Collins as an aunt. Jonathan Banks provides the voice of PIN.
★★★1/2
Posted by The Bloody Pit of Horror at 11:42 PM

a great one. i'm in the middle of reading the novel right now.

preston & hewlett have a couple of scenes together in THE DARKSIDE, made the previous year.

Great book and the movie is one of my 80s favorites. Need to write a longer, better review! I watched The Dark Side long ago and remember hating it.