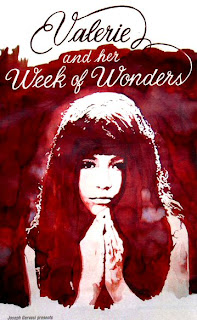 ...aka: Valerie and Her Week of Wonders
...aka: Valerie a týden divů
Directed by:
Jaromil Jires
Working solely inside the surreal anything-goes "dream/nightmare" realm of its pubescent protagonist, this avant-garde Czech film meshes classic (i.e. not whitewashed) fairy tale with Gothic horror and dark fantasy elements to intoxicating effect. It's not going to be for every viewer out there, especially those wanting a clean, linear storyline, but for everyone else who can appreciate an elegant, heavily symbolic, visually sumptuous European art film, this certainly does the trick. It's the type of unique, individualized vision, from director Jaromil Jires, which he co-scripted from a novel by Czech Surrealist Group founder Vitezslav Nezval, I can appreciate for being the sheer fact that it's uncompromising, even when I find myself feeling lost part of the time. But it's that good kind of lost where the film is so beautifully made you actually want to watch it again to try to decipher the bizarre things going on in this bizarre world. You're bombarded with so much imagery, you know it all somehow ties into the whole. In this case, the whole being the coming-of-age/sexual awakening of a 13-year-old girl. This is her dream and her own confusion about burgeoning womanhood, men, religion, family and authority figures, which sometimes take on disturbing and horrifying faces.

Wide-eyed Valerie, played by the ideally cast Jaroslava Schallerová (who was the same age as the character she's playing), awakens in an immaculate bright white room in an immaculate white dress in a home she shares with her very strict grandmother (Helena Anýzová). It's Springtime, a time for birth and discovery, as the bees are buzzing, the fruit is ripening, the sun is glistening in pools of water and the virginal blood is dripping on daisies. Valerie informs her granny that she's not a little girl anymore. A troupe of actors stroll into town, among them a scary, white-faced, bat-eared, fanged, fan-waving, chicken-blood-drinking NOSFERATU-like figure (memorably played by Jirí Prymek) who takes on many shapes throughout the film. He's the "Weasel," he's a priest, he's a constable, and he's somehow connected to the grandmother. Valerie's protector and ostensible suitor is a charming young man named Orlik (or "Eagle"). He (Petr Kopriva) helps her keep tabs on a pair of special earrings that may have magical powers and gives her a pearl she can use to ward off evil. Granny trades her home to The Weasel (who she knew as Richard five years ago when they were lovers) to regain her beauty and becomes a lascivious vampire in the process. By the time all is said and done, and the coming of age confusions starting to work themselves out, it's Autumn.

Just like in a dream, character identity is constantly shifting throughout. Granny claims to be Valerie's second cousin once she regains her youth, but may also actually be Valerie's mother. Richard/The Weasel takes on may be her father. Orlik/Eagle may be her brother. There are other smaller characters, such as an amoral priest to represent the untrustworthy male archetype who lust after innocent beauty regardless of their stature in the community, and a young woman married off to a much older man she doesn't love, which is probably a fear of many young ladies in certain countries. For the general movie fan, the costumes, sets, cinematography and art direction are exquisite and the score is beautiful and elegant. For the horror fan, you get death, vampirism, nightmarish imagery, some awesome cryptic set designs and that memorably ghoulish cat in the long black cloak lurking about. It's all better seen than described by me.
★★★
Posted by The Bloody Pit of Horror at 4:45 AM